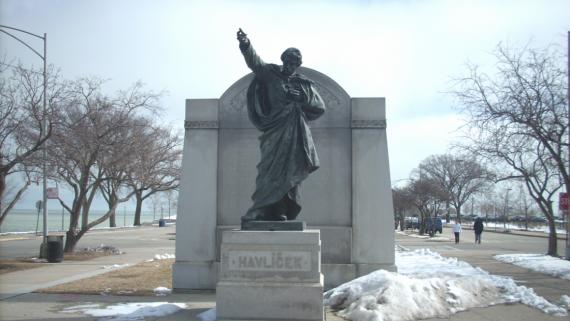 In the median of E. Solidarity Drive, east of S. Linn White Drive

A group of Bohemian American's originally dedicated the Karel Havlicek Monument in Douglas Park on the city’s west side in 1911. The group had organized the Karel Havlicek Monument Association several years earlier to raising money and plan the memorial. They commissioned Josef Strachovsky (1850–1913), a sculptor from Prague who had produced a monument to their revered countryman in 1907. He made two castings of the monument which had been installed in the Czech communities of Ziskove and Kuttenberg.

Strachovsky portrayed the standing bronze figure Karel Havlicek (1821–1856) as though he is giving an impassioned speech—with one hand clutching his cape and the other extended out in a dramatic fashion. The Bohemian journalist, critic, and poet who had advocated for constitutional reform and national rights was considered a martyr because he died soon after an unjust arrest and four years of exile.

Chicago’s Havlicek Monument has an elegant granite plaza with steps leading to a wall that provides a backdrop for the sculpture of Havlicek. The wall includes the following inscription: “In him Bohemia lost one of her best sons, a fearless defender of her rights and liberties, a man of sterling character. For which life sacrificed, his life!”

The monument was dedicated in July of 1911. Festivities included a parade with elaborate floats followed by a procession of adults and children dressed in traditional Bohemian costumes. Governor Charles S. Deneen and Mayor Carter Harrison II unveiled the monument at its original location in Douglas Park.

Over the years, the Karel Havlicek Monument was frequently vandalized and damaged. In 1976, the communities of Cicero and Berwyn, which both have large populations of Bohemian and Slovak Americans, asked the Chicago Park District to transfer ownership of the sculpture to one of the two suburbs. Park District officials did not believe the monument should be moved out of the city. The Czechoslovak Society of America’s agreed to help find a new location for the sculpture in Chicago. As a result, the monument was conserved and installed on Solidarity Drive in 1983 near the Kosciusko and Copernicus monuments. Unfortunately, portions of the sculpture’s granite setting were demolished in order to fit the monument at its new location.