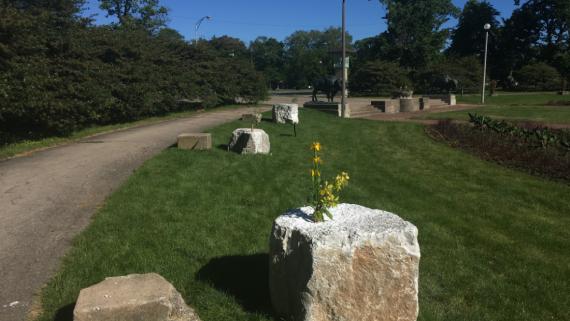 This series of sculptures is made in response to the history of Humboldt Park, but also makes reference deep into the earth itself. Much of the State of Illinois is drawn over a bedrock of limestone. It is the choice material for these pieces due to its qualities of being naturally-occurring, locally-available as well as a significant feature in the work of Jens Jensen.

The artists are specifically interested in the use of geological materials that tether place to history. In the case of Illinois and specifically Chicago, limestone is a ubiquitous material used in architecture largely because of its local availability and durability. Limestone functions as the distillation over time of a world unto itself, living, dying, stacking, decomposing, forming and solidifying into bedrock.  Limestone is formed through the compression of layers of minerals and organic material (largely oysters, mollusks and coral) over time.

The pieces also use copper, which, when exposed to natural elements changes color and actively stains material that it is in contact with—so, the limestone’s porous nature makes visible the passing of time and the changing of material.

A kind of clearing | Artwork

A kind of clearing | Artwork