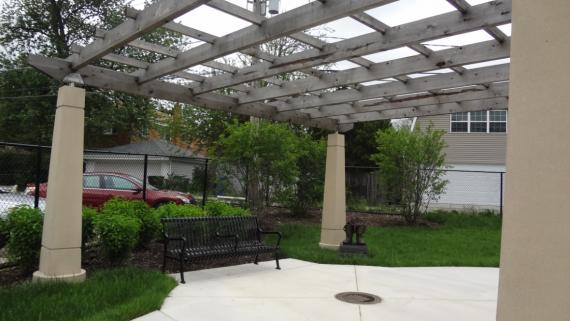 King Lockhart Park honors two Chicago firefighters who lost their lives battling a fire a Beverly tire shop that occupied this site in 1998. This inferno was one of the Chicago Fire Department’s worst tragedies in recent history. The site remained vacant until 2009, when the Chicago Park District acquired the half-acre parcel. Daniel Weinbach & Partners Landscape Architects designed the park to provide a quiet and reflective space that pays tribute to the two Chicago heros. The park has a lushly planted landscape with walkways and a brick central plaza laid out in the shape of a Chicago Fire Department Shield. Low walls are inscribed with the words “community,” “duty,” “courage,” “pride,” “family,” and “sacrifice.”

There are two seating areas with plazas and pergolas at exact the locations where the two firefighters died. Each of these areas has a bronze medallion inscribed with the firefighter’s name, badge number, and company number. Sculptors John Alaniz and Marshall Svendsen produced bronze boots topped with helmets individually devoted to each of the two men.

Patrick J. King (1957 – 1998) was a resident of Chicago’s southwest side. He was the product of a firefighting family— both his father and a brother had also served as members of the Chicago Fire Department. Having begun his career as a paramedic, King was a twenty-two year veteran of the department. Anthony Lockhart (1957 – 1998) graduated from Chicago’s Dunbar High School. After attending the University of Illinois, he worked for the US Postal Service for fourteen years. In 1989, he realized a lifelong dream of becoming a firefighter.