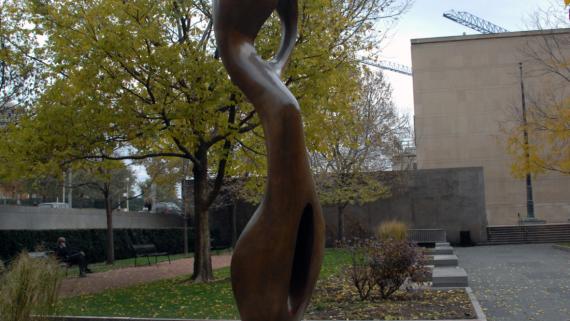 Located in the Stanley McCormick Memorial Court, north of the Art Institute of Chicago

Henry Moore (1898–1986), one of the most influential artists of the twentieth century, became well-known throughout the world for his large modern sculptural works. Many of them, including this bronze piece, are abstract representations of the human figure.

According to architect and museum curator A. James Speyer, Moore was “…not directly concerned with portraiture or anatomy, but with the generalized meaning associated with the human presence, a presence which infuses all of Moore’s work, however abstracted the forms appear.” He went on to explain that “Large Interior Form epitomizes Moore’s primary concerns, simultaneously embodying mass and void, gravity and growth, and man and nature.”

An English artist who first exhibited in Europe in 1928, Moore began to garner international attention in the 1930s. In 1947, the Art Institute of Chicago was only the second venue for Moore’s first exhibition in the United States. Large Interior Form was a gift to The Art Institute from the Henry Moore Foundation of Hertfordshire, United Kingdom. The sixteen-foot-nine-inch tall sculpture is one of six productions of the same sculpture. Moore often included large gaps in his pieces to emphasize organic three-dimensionality. The three holes in this piece were inspired by pebbles he found by the sea. When the Art Institute of Chicago received the piece in 1983, it held a month-long exhibition of ten small-scale sculptures and maquettes by Moore to celebrate the acquisition.