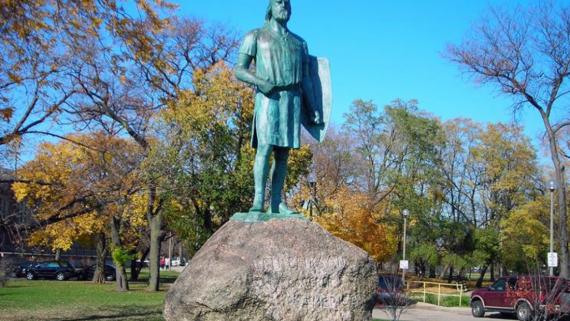 Sigvald Asbjørnsen sculpted the Leif Erikson Monument which stands on a massive granite boulder in Humboldt Park. Born in Oslo, Norway, Sigvald Asbjørnsen (1867–1954) began studying art at a young age. He received a scholarship at sixteen, and studied at the Royal Academy in Oslo. In 1892, he emigrated from Norway to the United States. He soon learned that preparations for the World’s Columbian Exposition in Jackson Park fostered exciting opportunities for artists in Chicago. After participating in the fair, he continued to live and work here, producing figurative sculptures, portrait busts, medallions, and other artworks for parks, libraries, and museums throughout America.

Chicagoans of Norwegian descent commissioned Asbjørnsen to create the monument. Norse explorer and adventurer Leif Erikson (c. 970–c. 1020) is believed to have been the first European to set foot on the American continent. Leif Ericson’s father, Eric the Red, established the first settlement in Greenland. During a journey from Norway to Greenland around 990 C.E., Leif Erikson landed at Newfoundland. Because he arrived well before Christopher Columbus, Erikson is often recognized as the “Discoverer of America.”

On October 12, 1901 tens of thousands of flag-waving Scandinavian-Americans participated in events to celebrate the monument’s unveiling. Despite heavy rain that day, the festivities included a parade and a two-hour ceremony in Humboldt Park.

On “Leif Erikson Day” in 1950, the statue was moved 250-feet from its original site to face Humboldt Boulevard, making it more accessible to the public. Among the large crowd celebrating the monument’s rededication was its then elderly sculptor, Sigvald Asbjørnsen.