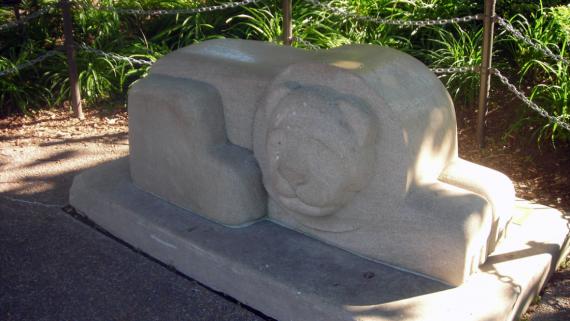 CitiCorp donated this carved Limestone Lion to the Lincoln Park Zoo in 1983. It honors the memory of prominent Chicago businessman A. Rush Waktins (1904–1978), a civic leader who had a great love of wildlife. Watkins led two expeditions to South Thailand and Tahiti for the Field Museum of Natural History. In 1959, he helped establish the Lincoln Park Zoological Society, later serving as its president.

Kathleen McCullough sculpted the reclining Limestone Lion, which is meant to be climbed upon by children. Although she is a relatively unknown artist, McCullough sculpted another interactive piece known as Cat in Repose. Installed in 1977 and recently restored, this artwork is located in the Portland, Oregon Transit Mall.