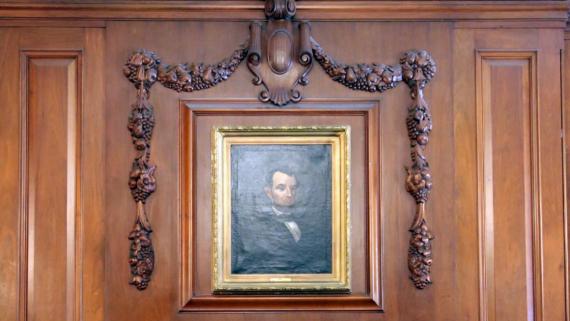 Completed in 1927, the Portrait of Abraham Lincoln was commissioned specifically to hang in its existing location above the fireplace in what is now the auditorium of Lincoln Park Cultural Center. The handsome Georgian Revival style building originally served as headquarters for the Lincoln Park Commission. It included offices for staff and board members, a police department with holding cells, and an elegant boardroom which is now the auditorium. In a 1941 Chicago Tribune article, David H. Jackson who had previously served as president of Lincoln Park’s Board explained that when the commissioners were p the new building they believed that it should “have a Lincoln Portrait worthy of the place of honor in the park bearing his name.” Although they had hoped to purchase a portrait of Lincoln from the Edward Payne Collection in Springfield, Illinois, when they learned that the price of that painting was $10,000, they decided have the artist of that painting, William Patterson paint a portrait specifically for the new administration building.

Born in Macomb, Illinois, William Patterson (1864 – 1939) was a Chicago portrait artist who became so devoted to creating portraits of Abraham Lincoln, that he also established a home in Springfield. Patterson immersed himself in the subject of Lincoln. He studied numerous photographs of the martyred president, and interviewed many of Lincoln’s Springfield neighbors who were still living in the early part of the 20th century. Patterson produced many Lincoln paintings including more than a dozen oil miniatures painted on ivory. The Lincoln Park Commissioners paid Patterson $800 for this portrait. According to James Cornelius, Curator of the Lincoln Collection in the Abraham Lincoln Presidential Library and Museum believes that Patterson based this portrait on a photograph of Lincoln taken by Anthony Berger in Washington, D.C. on 9 Feb. 1864, which was also the basis for the old $5 bill.