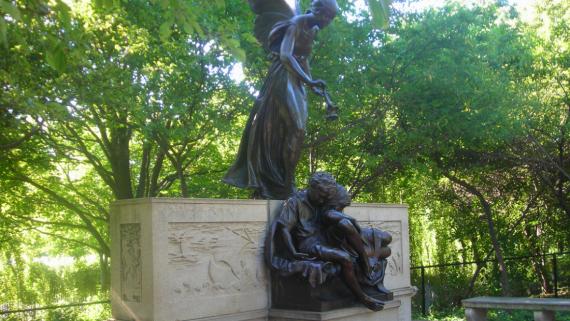 Shortly after the death of children’s author and journalist Eugene Field (1850–1895), several prominent Chicago newspaper editors joined together to commission a monument to the revered writer. Born in St. Louis, Field began his career as a writer and editor of newspapers in several Midwestern cities. He moved to Chicago in 1883 and began writing a popular humor column called “Sharps and Flats” for the Chicago Daily News. Field was also a prolific writer of poetry and short stories. By the time he died, Eugene Field was considered the children’s poet laureate of America.

The campaign to commission the Eugene Field Memorial went on for decades and included donations of pennies and nickels from school children as well as a major gift from the B.F. Ferguson Fund of the Art Institute of Chicago. Architects Delano & Aldrich and sculptor Edward Francis McCarten (1879–1947) produced the whimsical memorial nicknamed The Dream Lady. Reference to many of Field’s childrens' writings are incorporated throughout the composition.

A bronze fairylike “dream lady” hovers above a pair of sleeping children with a small bunch of poppies dangling from one of her hands. The granite base depicts carved scenes from Field’s poems including “The Fly Away Horse” and Seein’ Things.” There is a stanza from his famous “Wynken, Blynken, and Nod,” carved into the left side of the base and four lines from “The Sugar Plum Tree,” on the right side. Ornate shell-like children’s-sized drinking fountains are located on each end of the carved exedra. The monument is mounted on its original plaza.

The project earned Edward McCartan a Medal of Honor from the Architectural League of New York. The New York native who had begun honing his sculptural talents at a young age, studied at the Pratt Institute, the Arts Student League, École des Beaux-Arts in Paris and the American Academy of Rome. The Eugene Field Memorial was his first large project. He went on to create a highly acclaimed Diana, and sculptures for the Helmsley Building in New York.

Installed in 1922, the monument and plaza were originally located at the northwest corner of the Small Animal House (now the Helen Brach Primate House). The plaza was so close to the building that park officials began considering a new location for the Eugene Field monument in the late 1940s.