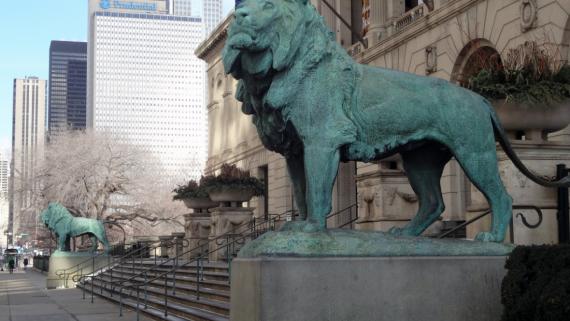 Flanking the front entrance to the Art Institute of Chicago, Edward Kemeys’ Lions are among the city’s most beloved and recognizable sculptures. A largely self-taught artist, Edward Kemeys (1843–1907) became famous for his sculptures of wild animals. He was considered the leader of the American animaliers—an artistic movement that began in France in the mid-nineteenth century in which artists studied living animals to inform their sculpture.

Kemeys first established a studio in Chicago in 1892. The following year, the World’s Columbian Exposition in Jackson Park showcased twelve of his sculptures including massive jaguars, bears, bison, and temporary versions of these lions. Like most of the other exposition artworks, the Lions were originally composed of plaster. During the fair, they flanked the primary entrance to the Fine Arts Palace—now the Museum of Science and Industry.

Shortly after the fair closed, Mrs. Henry Field donated funds to recast the Lions in bronze and install them in front of the Art Institute’s new building in Grant Park. Prior to their official dedication in 1894, the Chicago Tribune reported that Mr. Kemeys said that the Lions were “…conceived as guarding the building.” He explained that the south lion is “attracted by something in the distance which he is closely watching,” and that the north lion “has his back up, and is ready for a roar and a spring.”