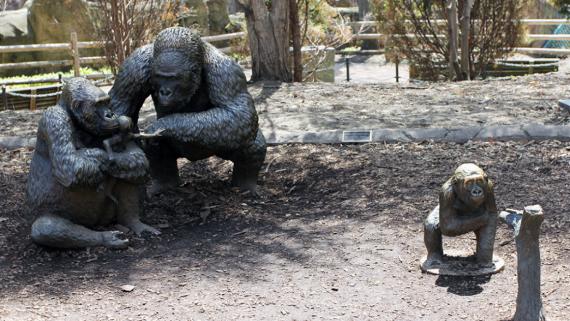 Near Regenstein Center for African Apes

This free-standing bronze sculptural group depicts a family of gorillas near a tree stump on which a butterfly has landed. The seated female gorilla holds her infant who reaches towards the crouching male gorilla. A fourth gorilla figure—who appears to be a juvenile—is off to the side, gazing intently at the butterfly.

Kentucky-born sculptor Bill Wieger (b. 1966) has had an interesting and varied background. He began studying marine biology in college, but decided to change course and graduated with a degree in theater arts. He worked on make-up and special effects for films in Hollywood for several years, but decided to change career paths again. Wieger relocated to Louisville, Kentucky to work as a commercial artist who specializes in sculptures and illustrations of animals. Wieger is deeply concerned with wildlife conservation.