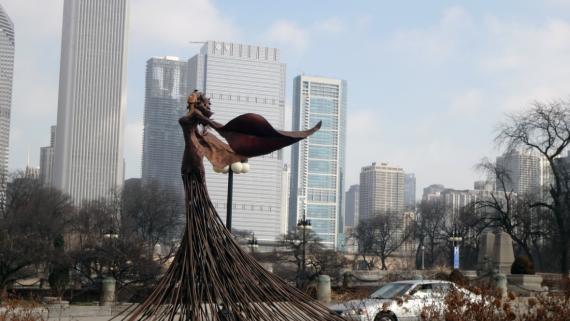 Dessa Kirk’s Magdalene is located on the small triangular landscape at the intersection of Congress Parkway and Michigan Avenue. Kirk created the sculpture specifically for this site. In the springtime, tulips line the female figure’s feet, and in the summertime the sculpture becomes part of the surrounding garden, as vines and flowers fill up the skirt of her dress.

Kirk spent her youth in Anchorage, Alaska. During the summers, she lived with her grandfather in an old Alaskan mining village. He encouraged her to experiment with welding and other metal constructions. After receiving a scholarship to the School of Art Institute of Chicago in 1992, she decided to make Chicago her home. In addition to several public works in Chicago—often composed of welded automobile parts—Kirk has installations in Columbus, Indiana; Three Oaks, Michigan; and Anchorage, Alaska.