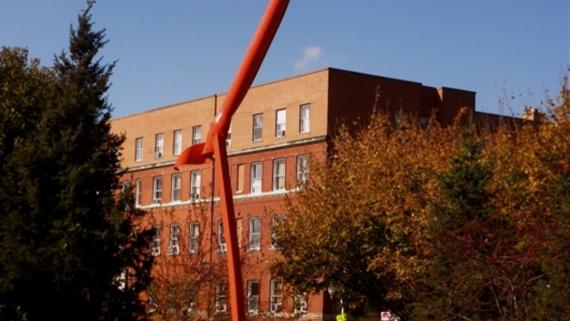 Artist's Statement: The sculpture Magoo—For Lord Buckley is a tribute to the late Richard Myrtle Buckley, an American spoken word artist who passed to a higher plane in 1960.  His career ran a crooked road from ‘20s Chicago speakeasy comic to '30s dance marathon announcer (teamed with Red Skelton) to finally blossoming into a manic yet erudite beat hipster surrealism with profound spiritual wisdom.

His work is still influential today, and has in the past affected a spectrum of people from Lenny Bruce to George Carlin through Frank Zappa and Robin Williams.

The title is borrowed from the body of a version of one of his pieces, “The Bad-Rapping of The Marquis de Sade.”  Buckley worked in Southern California in the 1950s and somehow developed some relationships with Air Force personnel based out at Edwards AFB in the high desert north of L.A., even wrangling a super-sonic “backseat” ride at some point.

Apparently, “Magoo” was cold warrior slang for sonic booms, and became the unofficial nickname of the Convair B-58 Hustler supersonic heavy bomber, with which I was familiar from childhood model-building days, and from the fuselage of which I borrowed the undulating forms of the upper portion of the sculpture.

Apart from the specific (although granted, oblique) connection to Buckley, the sculpture is a member of a series of sculptures that share a general skyward reach, and are meant to evoke spiritual aspiration and “raising up” in general.

Interestingly, due to the broad reach of the World Wide Web, Oliver Trager, the author of Dig Infinity—The Life and Art of Lord Buckley, a (and perhaps the only ever) biography of Buckley, became aware of the sculpture and will be including a picture of the sculpture and a statement from me about my adolescent discovery of Buckley in the upcoming revised e-publishing version of the book.