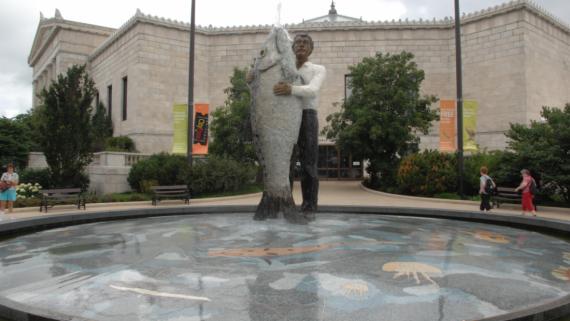 Located by the southwest entrance to Shedd Aquarium

A gift to the Shedd Aquarium from William N. Sick in honor of his wife, Stephanie, Man with Fish was installed in 2001. The painted bronze sculpture portrays a man with his arms wrapped around an enormous fish. Water sprays from the fish’s mouth, dripping into a reflecting pool below. The floor of the basin has colorful sea-life imagery.

Stephan Balkenhol (b. 1957), a German sculptor who studied at the Hamburg School of Fine Arts created Man with Fis. Balkenhol is best known for his minimalist and conceptualist works. His early sculptures consisted mainly of nudes, presented in classical Roman, Greek and Egyptian styles. Since the 1980s, however, his sculpture has largely portrayed ordinary men and women in everyday depictions, often with a surprising or light-hearted twist.

Several of Balkenhol’s works feature human figures relating to an animal or several animals in an unexpected way. Man with Fishconveys this playful approach as does Small Man with Giraffe which stands in front of the Hamburg Zoo. Balkenhol has exhibited his work widely throughout Europe and the United States at major cultural institutions such as the Saatchi Collection in London and the Hirshhorn Museum and Sculpture Garden in Washington D.C.