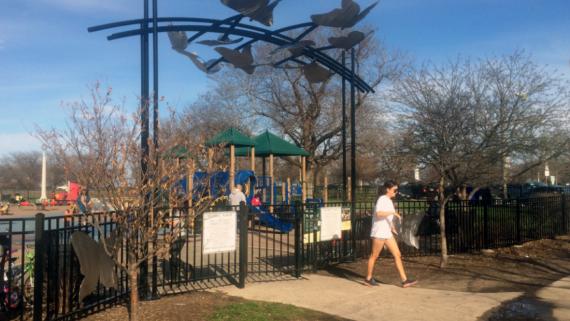 The Chicago Park District hired Smith Group JJR landscape architects and the Chicago Public Art Group to create this unique custom-designed play environment for Lincoln Park just east of the Margate Park field house. A team of four artists and one assistant produced an array of sculptures, mosaics, and interactive artworks that enliven the space. Completed in 2004, the 1400-square foot playground is enjoyable for both children and parents.

With Lake Michigan as the backdrop, animal and plant forms relating to water life became the theme. Jim Brenner created a series of stainless steel sculptural bugs such as bees, dragonflies, and butterflies that are mounted overhead, often creating interesting shadows on the ground level. Roman Villareal sculpted four limestone animals—a fish, frog, snail, and turtle—that can be climbed on by younger children. Community members, including children, collaborated with artists Ginny Sykes and Corinne D. Peterson on ceramic tile work and a ceramic mural that are incorporated into planters and retaining walls.