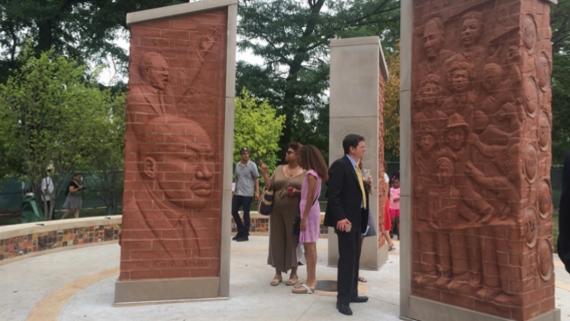 Sponsored by the Inner City Muslim Action Network (IMAN), the Martin Luther King, Jr. Living Memorial was dedicated on August 5, 2016 to mark the fiftieth anniversary of Dr. King’s historic march through Marquette Park.  The march was sponsored by the Chicago Freedom Movement, a campaign launched by dozens of organizations devoted to reforming the unfair housing practices that forced many African-Americans to live in the city’s overcrowded slums in the 1960s.  As Dr. King led protestors into the all-white residential areas near Marquette Park, they were met by angry mobs throwing bottles, rocks and bricks. Dr. King was struck on the head, and knocked to the ground.  He got up and continued marching; however, the protest ended abruptly due to the hostility of the counterdemonstrators.  After this August 5, 1966 protest, the City adopted the “Summit Agreement” which King described as “the most significant program ever conceived to make open housing a reality in a metropolitan area.”

IMAN commissioned the Chicago Public Art Group to create the Martin Luther King, Jr. Living Memorial.  Artists Sonja Henderson and John Pittman Weber produced the artwork.  It is composed of an oval-shaped plaza with three carved brick rectangular obelisks and a low seating wall.  The carved brick material relates to the bungalows and other historic brick buildings of the area. With this material, the artists were able to create detailed sculptural reliefs depicting Dr. King and many prominent community members who marched with him that day.  The imagery includes Rabbi Robert J. Marx, founder of the Jewish Council on Urban Affairs who wrote a historic letter to the Union of American Hebrew Congregations urging his fellow rabbis to march with Dr. King.  Reverend Willie Barrow, co-founder of Operation Push and Imam Warith Deen Muhammed, a highly influential African American Muslim leader, theologian, activist, and scholar are also depicted.  One of the panels has a series of oval medallions featuring the word “home” in different languages in reference to various cultural groups who live and have lived in the Marquette Park area throughout its history.

Hundreds of community members and civic leaders gathered for the dedication of the Martin Luther King Living Memorial on August 5, 2016.  The next day, IMAN sponsored the 1,000 Mile March to recreate a portion of Dr. King’s historic march.  This was held to honor Dr. King’s legacy and to call for unity, peace and justice in Chicago today.