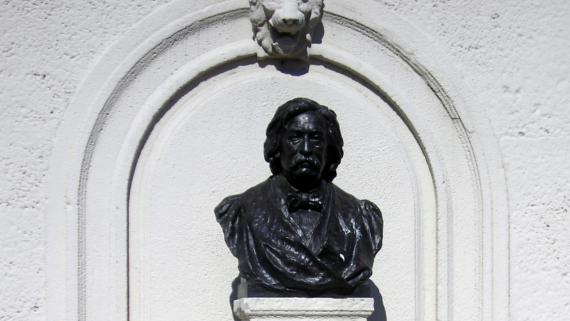 This bronze portrait bust of U.S. Chief Justice Melville Weston Fuller is a replica of a marble sculpture located in the Supreme Court Building in Washington, D.C. Born in Maine, Fuller (1833–1910) settled in Chicago in the 1850s. As the attorney for the South Park Board of Commissioners from 1882 to 1886, Fuller made several decisions that were instrumental to Chicago’s parks, particularly concerning the development of the lakefront. In 1891, three years after President Cleveland appointed Fuller as the eighth Chief Justice of the Supreme Court, William Ordway Partridge (1861–1930), a highly regarded American artist, sculpted a marble portrait bust of Fuller for the Capitol Building in Washington, D.C.

Soon after Fuller’s death in 1910, the South Park Commissioners named a new small park in his honor. Through a fund established by South Park Board President Judge John Barton Payne, the commissioners had the replica of the Washington, D.C. bust made for Fuller Park in 1912. The bronze bust stands on a limestone pedestal located in an architectural niche in the courtyard of the Fuller Park field house. Formal dedication ceremonies took place in 1913.

Partridge had a long and successful career. Today, his work can be seen at the Metropolitan Museum of Art in New York, the National Cathedral in Washington D.C., and in Jamestown, Virginia. There are two other sculptures by William Ordway Partridge in Chicago—the Edward Everett Hale bust at the Union League Club, and the William Shakespeare Monument in Lincoln Park.