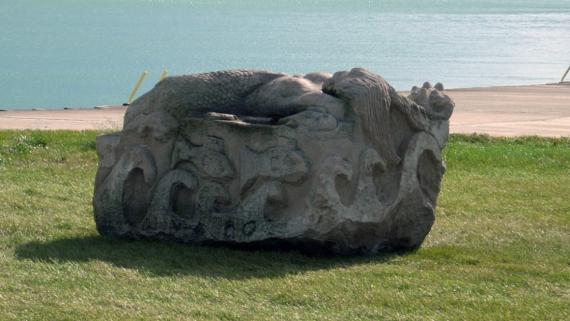 In the early morning hours during the course of two weeks in 1986, a group of Chicago artists surreptitiously carved this whimsical Mermaid into the limestone revetments along the lakefront in Burnham Park. One of the artists, Roman Villarreal, asked his teenage daughter Melinda to serve as the model for the sculpture. The artists wanted to give bathers the impression that a mermaid, swimming ashore from Lake Michigan, had fallen asleep and become petrified in the stone. Although the group had considered adding the figures of Neptune and his daughters, they stopped after carving the Mermaid.

The identities of the sculpture's artists remained a mystery for many years until the Chicago Sun-Times revealed their names in a newspaper article in 2000. The public came to appreciate the limestone Mermaid so much that when lakefront revetment repairs began near E. Oakwood Boulevard, the community asked the Chicago Park District to save the Mermaid. The Park District carefully removed the sculpture in 2004 and placed it in storage. In 2007, students involved in a community internship program worked with the original artists to restore the carved Mermaid and install it temporarily in Bessemer Park.

Between 2003 and 2009, the Chicago Park District worked with the Chicago Department of Transportation and the Army Corps of Engineers to rebuild the Burnham Park revetments from E. 37th to 41st streets. In the fall of 2010, the Mermaid sculpture was moved from Bessemer Park to a newly developed plaza and lawn area near E. 41st Street. Although the Mermaid is no longer incorporated into the shoreline revetments, the new site provides an appropriate context with Lake Michigan as the background.

Roman Villarreal, a south sider who once worked in the steel mills, considers himself “a sculptor of the people.” He has created several works of art for Chicago parks including a series of sculptures known as Interpreting Nature in Humboldt Park that he produced with a group of teenagers. Today, Villarreal continues to teach, create, and exhibit sculpture in Chicago.

Gallery:
Burnham Park: Mermaid
Date Posted: 7/20/2015 Originally carved into the limestone revetments along Lake Michigan in the 1980s, the Mermaid was…
Advertisement