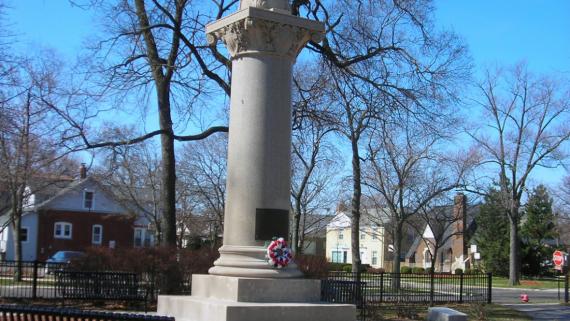 Located on the far Northwest side of Chicago, Monument Park was named for this World War I Monument, also known as the Honor Roll for Vets. In November of 1918, a representative of Unit No. 379 Illinois Volunteer Training Corps presented a resolution to erect the granite memorial to honor all the citizens of Edison Park who had served in the United States military and navy during World War I. The Edison Park District—which managed and operated the park prior to the formation of the Chicago Park District in 1934—accepted the gift of the memorial.

Installed in what was then known as Ridge Lawn Park, the monument was composed of a Corinthian column taken from the Cook County courthouse which had been demolished in 1906. Topped with a newly-carved limestone eagle perched on a globe, the granite column was erected in the summer of 1919. The park was soon renamed in honor of the monument.

Sometime within the next few decades, vandals broke off the tips of the eagle’s wings. The World War I Monument remained damaged until 2008 when it was restored by the Chicago Park District. The project included cleaning and tuck-pointing the masonry monument and steps, carefully recreating the broken portion of the wings, repairing the original zinc plaque, and improving the surrounding landscape.