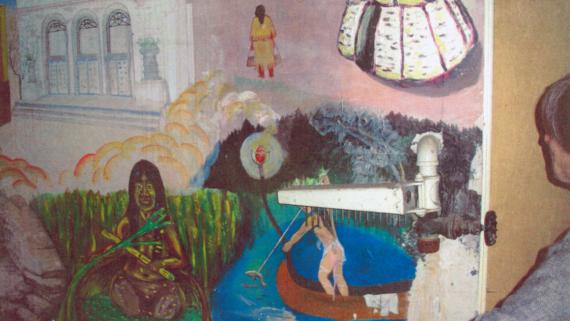 The Peterson Park field house building originally housed the research laboratory and morgue for Chicago's Municipal Tuberculosis Sanitarium. The public health facility operated from 1915 to 1974, and this building opened in 1923. Frances O'Cherony Archer, a local historian and blogger who has a website entitled Chicago Municipal Sanitarium Remembered, explains that when the Municipal Tuberculosis Sanitarium first opened, it was "the largest Sanitarium of its kind, and the first to have a Maternity Ward and Nursery." The complex had dozens of buildings including administration buildings, a power house, infirmaries, and housing for patients. With a capacity of 950 beds, the facility functioned like a small village.

Little is known about this highly detailed mural located in the basement of the field house, the space originally used as the morgue. Since early photos of the research laboratory and morgue do not depict the mural, it is likely that it dates to the 1930s or 1940s. The mural depicts the history of the site and the surrounding area, including illustrations of Pottawatomie Indians who lived in this area during pre-settlement times, as well as truck farms that soon followed. The artwork also depicts Pehr Peterson (1846 –1927), a Swedish immigrant and horticulturalist for whom the field house is named. Peterson once owned major portions of this site and used it for his Rose Hill tree nursery. Individuals who played significant roles in the history of the Sanitarium are pictured in the mural, including Dr. Theodore Sachs, its founding director.

Gallery:
Peterson Park: Mural
Date Posted: 7/28/2015 Presenting the history of the site and community, the mural includesa depiction of the sanitarium…
Advertisement