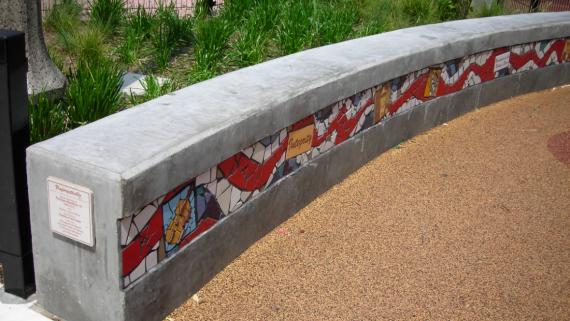 In June 2010, the South Side Chatham neighborhood lost one of its most respected members: Chicago police officer Thomas Eugene Wortham IV. Born and raised in Chicago, Wortham was deeply committed to preserving the safety of his community and his country. He served two tours in Iraq as part of the US Army’s 1-125th Infantry Battalion and the 105th Cavalry Regiment. He rose to the rank of First Lieutenant in 2008, receiving many commendations, including the Bronze Star.

After leaving the military, Wortham became a police officer, first in Evergreen Park and then in Chicago. Officer Wortham served for nearly three years in the city’s Englewood Police District. Wortham’s public service included donating his time to the Chicago parks. He lived near Nat King Cole Park and was the president of its Park Advisory Council beginning in 2008. His accomplishments included spearheading the development of a new playground in the park. Sadly, Wortham did not live to see his plan come to fruition. During off-duty hours, he was tragically murdered during an attempted robbery just across the street from the park.

The community came together to continue Wortham’s efforts. They decided that the new playground should include a mosaic commemorating his loss. The poignant mosaic was made possible through the support of the Chicago Park District, Friends of the Parks, and the Chicago Public Art Group. Lead artist Damon Lamar Reed worked with local volunteers to produce the broken-tile mosaic, which lines the knee walls surrounding the playground equipment. Taking inspiration from Wortham’s life, the mosaic includes descriptions of his character: words such as trustworthy, honest, integrity, and concerned appear throughout the composition. Two tiles depict photographs of Wortham in his Army and Chicago Police Department uniforms.

Titled Unforgettable, the mosaic also references the classic song by jazz legend Nat King Cole. Musical instruments such as drums, guitars, and a saxophone are portrayed, deepening the mosaic’s connection to the jazz icon for whom the park is named. The symbolism of Cole’s song undoubtedly extends to Wortham himself—a man who was truly unforgettable to his community. His spirit lives on in the playground, which was dedicated in his honor in October 2011.