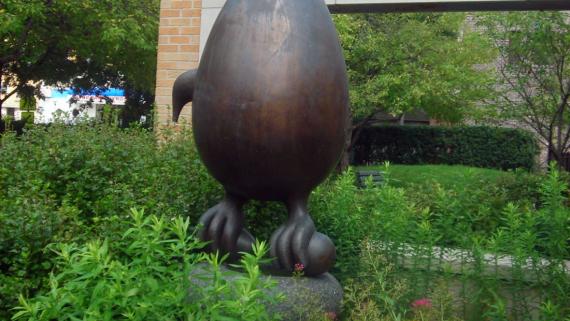 Cosmo Campoli (1923–1997), a sculptor who lived in Chicago’s Hyde Park neighborhood, created Birds of Peace—also called Guarding the Nest or The Egg. This five-foot tall abstract bronze artwork emulates a bird with an egg for its body, a beak-like form at its mid-section, and two eggs at its feet.

Campoli said, “The egg is the most exquisite shape there is. You hold one in your hand and you are holding the whole universe.” After he cast the work in 1963, Campoli kept the sculpture in his Hyde Park home for several years until the Hyde Park-Kenwood Community Conference suggested its installation in Nichols Park. The artist, community members, representatives of Chicago Park District, and public officials dedicated the sculpture on June 3, 1970.

Over the years, Bird of Peace was vandalized and damaged several times, prompting the Chicago Park District to conserve and reinstall the sculpture in a more secure way. Sculpture conservator Andrzej Dajnowski conducted the project. The bronze sculpture and its granite nest-like base were relocated near the new Nichols Park field house (built as part of the Murray School addition). To help secure the monument, titanium steel rods were installed, anchoring the sculpture to a new concrete pad. New lighting also help protects the sculpture, which was rededicated on March 19, 2005.