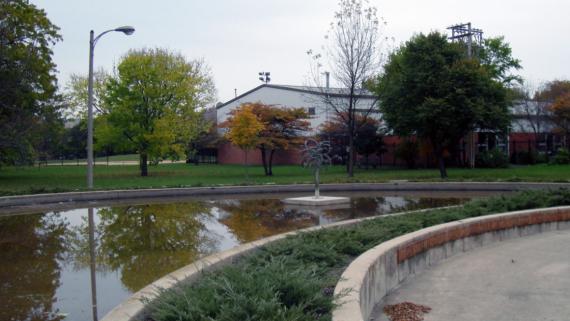 In 1964, the Hyde Park Kenwood Community Conference sponsored a contest to solicit new artworks for the parks in the neighborhood. Open only to students at Chicago's School of the Art Institute, the contest awarded prizes of $200 each for three winning submissions. More than fifty students entered models into the contest. The jury, which included Hyde Park artist Cosmo Compoli, selected three winners—two sculptures for Park No. 277, a new open space which had not yet been named (later known as Nichols Park), and one for nearby Spruce Park.

Gary Wojcik’s model for Spinning Water Fountain was one of the three. The two other winners were Yvonne Hobbs, with a massive stone bird-like sculpture for Nichols Park that was never executed, and Jerome Skuba who produced an abstract sculpture of three children. Skuba's proposoal was realized. The work, knonw widely as Snoopy, was located in Spruce Park for many years. Although Gary Wolcik named his artwork the Spinning Water Fountain, it did not actually spin. The sculptural fountain is composed of a tall vertical copper tube, topped by a mass of about two dozen copper arms that spray water.

In 1967, Wojcik created the fountain and exhibited it at Chicago’s World Flower and Garden Show. At the time, the Chicago Park District was developing plans for Nichols Park, and Wojcik’s sculpture and shallow crescent-shaped reflecting pool were incorporated into the design. Completed the following year, the sculpture was dedicated to five Hyde Park residents whose names are inscribed on the side of the basin, Josiah Willard Gibbs, Robert E. Van Goor, William Bela Hoffman, Lazar Perryman, and Harry Schneiderman.

Gallery:
Nichols Park: South Fountain
Date Posted: 7/28/2015 Although the artist called his work the Spinning Water Fountain, it has never had any components…
Advertisement