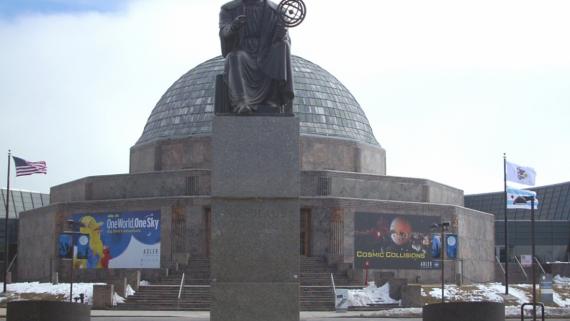 Solidarity Drive in front of the Adler Planetarium

Dedicated in 1973, the Adler Planetarium erected this monument to mark the 500th anniversary of the birth of Nicolaus Copernicus (1473–1543), the father of modern astronomy. Born in Poland, Copernicus (whose given name was Mikolaj Kopernik), studied mathematics, astronomy, theology, and medicine at the University of Krakow. In the sixteenth century, he challenged age-old beliefs by developing the pioneering theory that the earth revolves around the sun. Copernicus published his seminal work, On the Revolutions of the Celestial Spheres, a series of six books, in 1542, the year before his death.

The Copernicus Foundation of Chicago raised $150,000 to replicate an original Nicolaus Copernicus Monument located in Warsaw, Poland at the Palace Staszic, home of the Polish Academy of Science. Sculpted by famed Danish sculptor Bertel Thorvaldsen (1786–1844), the original Polish monument was designed in 1822 and executed by 1830. The original monument was damaged in the destruction of Warsaw during World War II. Although the Nazi's planned to melt it down, Poles eventually recovered the sculpture, and after full repairs and conservation, it was rededicated in 1949.

Sculptor Bronislaw Koniuszy (b. 1917) made the recasting of the original Polish monument for Chicago. Koniuszy served as a member of the Polish Underground Army before graduating in 1953 from the Academy of Fine Arts in Warsaw. After making the new casting, the artist shipped his 100,000 pound bronze statue on the Zawiercie—the first ship to travel regularly between Chicago and the Polish port, Gdynia.

Chicago’s Nicolaus Copernicus Monument not only honors an important scientific innovator, but also serves as a symbol of pride for the city’s large and active Polish community. At the dedication ceremony on October 14, 1973, Mayor Richard J. Daley credited the monument with symbolically linking Chicago and Poland. He also pronounced October 14th as Nicolas Copernicus Day.