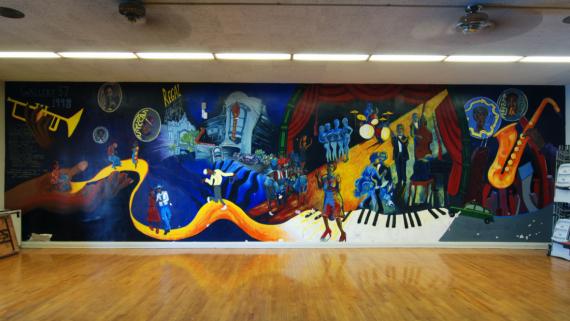 This vivid mural enlivens the multipurpose room of the Ogden Park field house. The colorful composition was sponsored by Gallery 37, a Chicago organization that promotes arts programming for the city’s youth. Lead artist Jesse Shipley worked with assistant artist Victoria Bianco and fourteen student apprentices to create the mural.

The whimsical artwork is a tribute to jazz music in Chicago. The city’s jazz scene was centered in the Bronzeville neighborhood on the South Side, not far from Ogden Park. The team of artists and apprentices visited the Chicago Jazz Archive at the University of Chicago to learn about the city’s history of jazz and gain inspiration for the composition. The major element depicted in the mural is a theater stage, enclosed with red curtains and featuring a bright yellow spotlight. A four-piece band accompianies a female vocalist who appears to be standing on a giant keyboard. Several audience members are seated at a club table and a handsomely dressed couple enjoys a dance.

To the left of the stage, an outdoor scene depicts some of Chicago’s most well-known jazz venues. Built in 1919, the Vendrome Theater was the city’s first location where African Americans could enjoy films, stage shows, and jazz performances. The Vendrome was surpassed by the opening of the Regal Theater in 1928. Along with Club Delisa, the Regal Theater played a key role in the Chicago jazz scene for over forty years. Countless music legends performed there including Ella Fitzgerald, Miles Davis, Nat King Cole, The Temptations, Stevie Wonder, and the Jackson 5. Several other noteworthy singers and musicians—Duke Ellington, John Coltrane, Count Basie, Maxine Sullivan, and Louis Armstrong—are portrayed in small medallions that float throughout the mural.

At the far left, a giant upturned hand holds a woman beating a drum. Dressed in a brightly patterned robe, she perhaps symbolizes the roots of jazz in traditional African music. A bright yellow ribbon unfurls at her feet and extends across the composition. This golden band forms a pathway for several styles of dance that evolved in relation to jazz music, including tribal dancing, swing dancing, and breakdancing. Viewed as a whole, the flowing, yet frenetic, scene unfolds in a manner akin to the improvisational nature of jazz music itself.