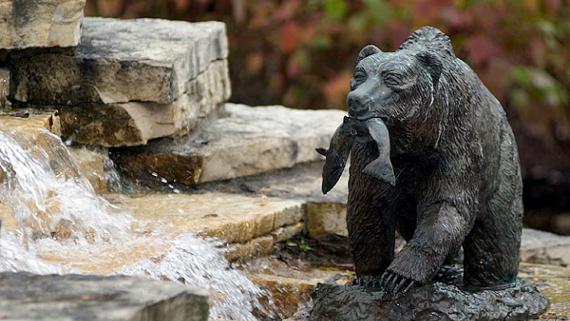 Near Flamingo and Waterfowl Lagoon Waterfall

Located at the rocky edge of a pond in the flamingo and waterfowl exhibit, Old Fishing Hole is composed of a bronze figure of a grizzly bear that appears to be emerging from the water, after just having captured his fish.

It was sculpted by Peter Darro (1917–1997), who was best known as a portrait painter and illustrator. Born in Italy, Darro trained at the American Academy of Art in Chicago. He specialized in wildlife art throughout most of his career. Wildlife magazines often featured his illustrations which presented natural themes in a realistic style. While he was a prolific painter, he produced a much smaller collection of sculpture throughout his life.

Gallery:
Lincoln Park Zoo: Old Fishing Hole
Date Posted: 7/27/2015 The bronze bear looks especially realistic because it is located on the edge of the Waterfowl…
Advertisement