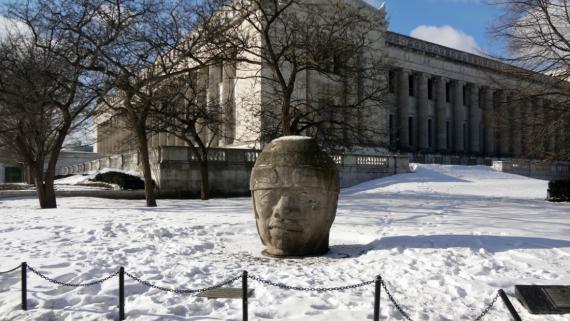 This large reproduction of a 3,000-year-old sculpture was a gift from the government of Veracruz, a state in southeastern Mexico. Veracruz was the home of the pre-Columbian Olmec people who existed from 1200 to 800 B.C.E. This ancient civilization—the first to build religious centers—is also known for producing small jade artworks and large heads like this reproduction which is located just east of the Field Museum. Archaeologists have discovered a total of seventeen large heads believed to have come from the Olmec.

This seven-foot-tall carved stone piece, created by Ignacio Perez Solano, is one of several replicas of Olmec Head Number 8 that can be found outside of Mexico. Along with additional colossal heads and other artifacts, the original Olmec Head Number 8 is located at the Museum of Anthropology in Xalapa, Veracruz. The first enormous stone head was found during a 1939 excavation. The Veracruz museum was founded in part to house and preserve the region’s vast Olmec collection. The Field Museum’s replica weighs seven tons. Its acquisition coincided with the design for the Hall of the Americas at the Field Museum.