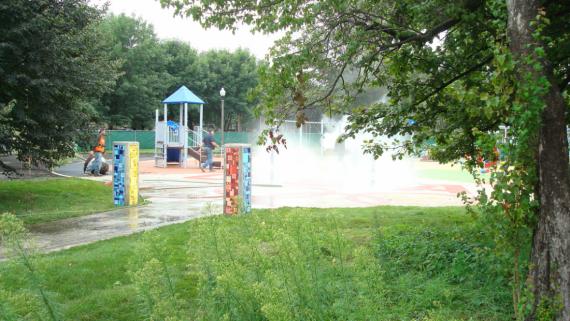 When African-American track and field star Jesse Owens (1913–1980) won four gold medals at the 1936 Olympics in Berlin, his victory was especially poignant considering that Adolf Hitler had expected the games to support his theory of “Aryan superiority.” Today, Jesse Owens is one of the most famous names in the history of sports. This playground, funded in-part by generous donations from the Allstate Insurance Company, Allstate Foundation, and the United States Olympic Committee, celebrates Jesse Owens’s achievements as well as a dream shared by children throughout the world—to compete in the Olympics.

Designed by the Hitchcock Design Group and Julia Sowles-Barlow, Isaiah Terry, and Rachel Terry of the Chicago Public Art Group, the playground incorporates a number of Olympic-themed elements. Olympic rings emblazon the pavement of the entry plaza. A track with lanes encircles the play area, with stadium-style seating nearby. The playground also features mosaic medal stands, competition stations, and a long-jump pit with a bronze plaque marking Jesse Owens’ record as well as other U.S. Olympic and Paralympic long-jump track records.