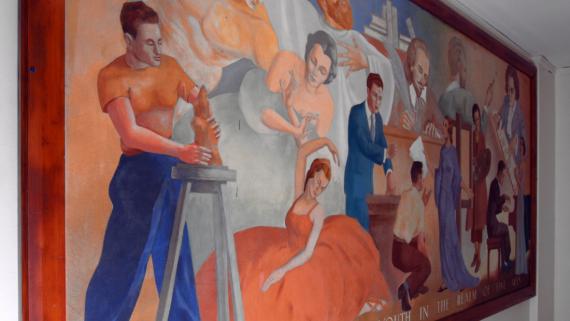 This mural depicts a large number of men and women, each actively engaged in an artistic endeavor such as acting, dancing, painting, playing the piano, sculpting, singing, or writing. The subject matter and style is reminiscent of murals produced by Works Progress Administration (WPA) artists during the Great Depression between the mid-1930s and early 1940s. The title, Participation of Youth in the Realm of the Arts, is painted in capital letters across the bottom of the canvas.

Although the mural is not signed, the initials P.A.C. are painted in its upper-left-hand corner. This likely signifies that the Pottawattomie Art Class created the mural. Chicago Park District instructor George Hruska (1893–1970) taught the class, which met at Pottawattomie Park. Hruska also held art classes at Shabonna and Wilson Parks. A student of renowned artist John H. Vanderpoel at the School of the Art Institute of Chicago, Hruska went on to study portrait painting in Munich, Germany, prior to serving in World War I. After the war, he worked as an artist and exhibited some of his work at A Century of Progress World’s Fair in 1933 and 1934.

It is unknown as to why Participation of Youth in the Realm of the Arts was hung in Eugene Field Park. It was originally located in a club room on the first floor of the field house. Because of its low height, children could easily reach and deface the artwork. In 2006, after the mural was restored by the Chicago Conservation Center, the Chicago Park District moved it from the club room to the auditorium so that the painting could be protected from vandalism. Because the auditorium is used for so many theatrical productions, the Chicago Park District moved the mural once again in 2013. Now hung on a wall on a main stairway landing, the new location provides better public access.

Participation of Youth in the Realm of the Arts | Artwork

Participation of Youth in the Realm of the Arts | Artwork