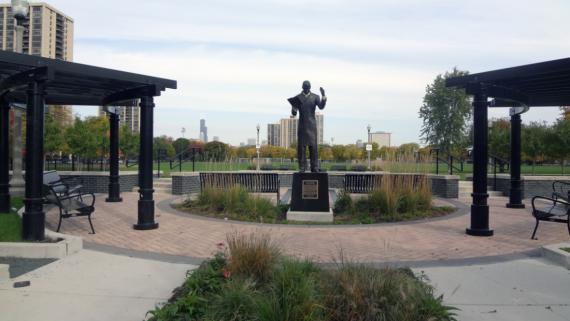 Commissioned by the Chicago Park District and erected in 2014, the Paul Laurence Dunbar monument honors one of the most significant figures in African American history. The son of freed slaves, Paul Laurence Dunbar (1872 – 1906) grew up in Dayton, Ohio where he demonstrated his talents as a writer at a young age. As a teenager, he published poems in the Dayton Herald and president of the high school’s literary society. After graduating, he edited an African American neighborhood newspaper called the Dayton Tattler that was published by his friend Orville Wright. Dunbar wrote poetry in his spare time while working at various jobs that he needed to support himself. In 1893, while working as an elevator operator, he self-published his first book of poems, Oak and Ivy. To help defray his costs, he sold copies of the book to passengers on his elevator.

Dunbar moved to Chicago to find work here during the World’s Columbian Exposition of 1893. He befriended the famous abolitionist, statesman and author Frederick Douglass who helped Dunbar find a job and arranged to have him read a selection of his poetry at the World’s Fair. Paul Laurence Dunbar went on to publish more than a dozen books of poetry and fiction and a play before his death at the early age of 33. He was among the nation’s first African American poets to gain critical acclaim and national attention.

The Chicago Park District and Paul Laurence Dunbar Advisory Council worked together to commission the artwork as part of a major program to renovate the park. The Park District and Advisory Council invited approximately six local artists to submit proposals for the project. The group selected Debra Hand to sculpt the monument. Hand is a self-taught sculptor, painter, and mixed media artist. Hand has work exhibited at the Smithsonian Institution, the DuSable Museum of African American History, and the Anacostia Community Museum. For this sculpture, she was inspired by the theme of dreams. The artist asserts that Paul Laurence Dunbar’s legacy “shows us that, with determination, a mere dream may be turned into a reality that has the power to enhance humanity and influence generations for years to come.” She created a full length bronze portrait sculpture of Dunbar that incorporates text from his poem entitled “Dreams” into a wall that is part of an adjacent seating area.