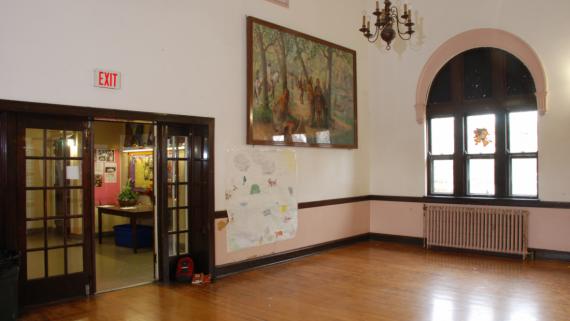 In 1941, a group of approximately ten art students donated this Pottawattomie Village mural to Pottawattomie Park on Chicago’s far north side. They were all students of the Pottawattomie Art Class taught by George Hruska, who was also an art instructor at Shabonna and Wilson Parks. George Hruska (1893–1970) had attended the School of the Art Institute of Chicago, where he trained under the renowned artist John H. Vanderpoel. Hruska went on to study portrait painting in Munich, Germany, and then served in World War I. After the war, he worked as an artist and exhibited some of his work at A Century of Progress World’s Fair in 1933 and 1934.

The students who produced Pottawattomie Village included Nanette Burhart, Helen Cox, Dolly Dana, Martha Fidler, Cathyrn Meyer, Mary Orsinger, Clara Stacher, and Louise Wilson. The painting depicts Chief Alexander Robinson, who wears an American style suit, talking with two Native Americans in tribal garb, in the midst of a bustling Pottawattomie village. The son of a Scottish fur-trader father and Pottawattomie mother, Chief Alexander Robinson (1787–1872) was instrumental in negotiating several early-nineteenth-century treaties between Native Americans and the United States government. In return for persuading tribal members to peacefully abandon the area, the federal government granted Robinson a two-square-mile property west of Chicago. The chief’s family occupied this land for many decades. When the art students decided to paint the village scene, Robinson’s granddaughter granted them permission to use the property to help create the painting. Today, the land is part of the Robinson Reserve, part of the Cook County Forest Preserve.

First displayed at Pottawattomie Park, the painting was removed sometime after the demolition of the park’s original field house. In 2008, after the Chicago Park District had it fully conserved, the mural was moved to the auditorium of the River Park field house.

Gallery:
River Park: Pottawattomie Village
Date Posted: 7/27/2015 Painted by a group of students at Pottawattomie Park in 1941, this mural portrays the vibrant…
Advertisement