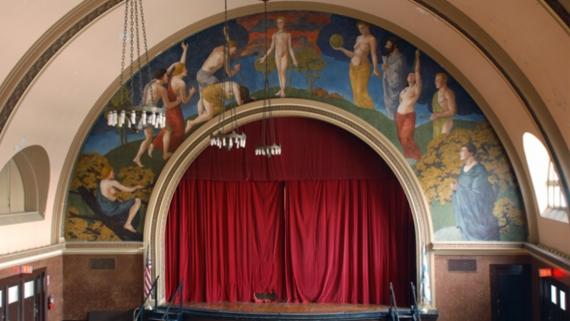 In 1919, five years after the Pulaski Park field house opened to the public, Jens Jensen met with officials to plan a competition for students to create a mural that would serve as a focal point of the building’s large auditorium. Danish immigrant Jens Jensen (1860–1951) had worked his way up from laborer to superintendent of Chicago’s West Park System. By this time, his title had shifted to consulting landscape architect; however, his role went far beyond designing park landscapes. Jensen had a strong affinity for the arts, and he served as a director of the Municipal Art League and member of the Illinois State Art Commission. He believed that parks and field houses could provide an important venue to expose residents of congested neighborhoods to the fine arts.

The area surrounding Pulaski Park had a large population of Polish immigrants. William Carbys Zimmerman had designed the park’s sprawling brick field house to emulate the style of architecture with which many residents had been familiar in Eastern Europe. The auditorium’s arched proscenium was selected as the location for the winning entry in the mural competition. The West Park Commission offered prizes of $100, $50 and $25, and another $200 to cover the costs of materials for the first place winner to paint the mural.

A special committee awarded first prize to a student named James Gilbert (1900–1969). Gilbert’s mural depicts a series of semi-nude human figures that seem to be striving to reach the top of the arch, where a nude adolescent with both of his arms extending out. The imagery includes vivid natural elements including trees with exuberant foliage, a bright blue sky and a sunset of pinks and oranges behind the center figure.

Gilbert spent three months painting the mural during the summer of 1920. Because of this time commitment and the fact that he went over budget and had to spend some of his own money on materials, the commissioners voted to award him an extra payment of $100. William Grower, president of the West Park Board of Commissioners, suggested that it seemed only “proper” to give Gilbert a bonus “inasmuch as this decoration has saved the Park Board several thousand dollars, predicated upon the lowest estimate obtained at the time from other sources.”

After completing his studies at the Art Institute of Chicago, James Gilbert began his career as an artist in Chicago. He won the Robert Rice Jenkins Prize for the painting "Mexican Morning" in 1925. Between 1945 and 1965, he taught art at the University of Chicago, and from 1962 until his death he was an artist-in-residence at St. John’s College in Annapolis, Maryland.

Gallery:
Pulaski Park: Proscenium Arch Mural
Date Posted: 7/28/2015 On the left sie of a nude boy who stands at the tope of the archi, partially clothed figures…
Advertisement