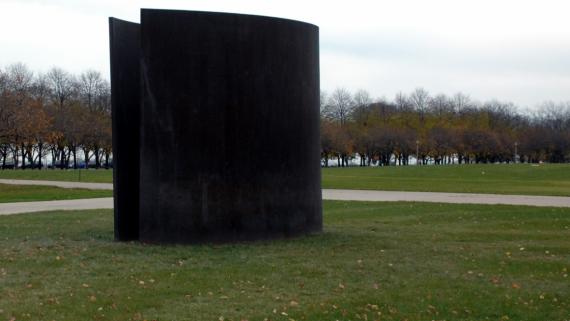 Richard Serra (b. 1939), one of America’s most renowned living artists, created this large-scale minimalist sculpture. The son of a San Francisco pipe fitter, Serra worked for several years in West Coast shipyards and steel mills before receiving an MFA from Yale University. He went on to receive a Yale Traveling Fellowship and a Fulbright grant which allowed him to study art in Paris and Florence.

Serra became known for constructing sculptures from industrial materials, particularly large sheets of metal known as “Cor-Ten” or “weathering” steel. This material has a surface that looks rusty, but in fact resists corrosion and does not need to be painted. Because of the large and abstract forms and their rusty finish, many of Serra’s sculptures have been considered controversial.

Reading Cones—named for the town in which it was made, Reading, Pennsylvania—is a good example of Serra’s signature minimalist metal sculptures. It is composed of two freestanding seventeen-foot-tall curved walls of “Cor-Ten” steel that stand just far enough apart to allow a person to walk between them. On axis with the Clarence Buckingham Memorial Fountain, the open space between the two metal walls of Reading Cones frames an unexpected view, providing an interesting contrast between old and newer artworks.

The Leo Burnett Company officially donated Reading Cones to the City of Chicago in 1990. At that time, its placement in Grant Park was considered temporary because city officials had planned to relocate the sculpture to the entrance of State Street Mall, which was then under renovation. Although the State Street Project was completed in 1996, the thirty-two ton Serra sculpture remains in its Grant Park location.