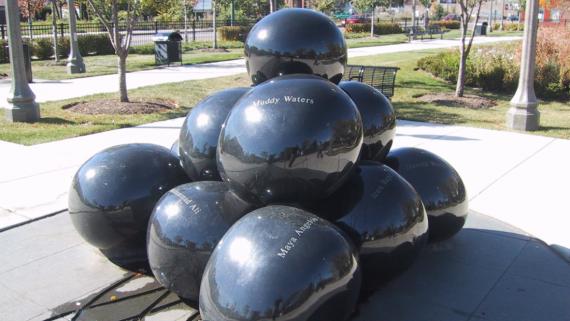 In 2000, after the City of Chicago transferred a derelict site in the Auburn-Gresham neighborhood to the Chicago Park District, the agency hired landscape architects Site Design Group and artist Jerzy Kenar to plan the new park. When Mayor Richard M. Daley dedicated the park two years later, he stated that “The area, which was once ignored and run-down, has begun a new era, a renaissance of exciting change.” Renaissance Park was named in honor of the site’s symbolic and physical importance to the improving-community that it serves.

Jerzy Kenar (b. 1948) created the sculptural fountain which serves as the centerpiece of the beautiful new park. Born in Iwonicz Zdroj, Poland, Kenar studied sculpture at the Academy of Fine Arts in Gdansk, Poland. He immigrated to the United States, settling in Chicago, where he opened the Wooden Gallery in 1980. In addition to large scale wooden sculptures, Kenar has also produced works of bronze and stone.

Completed in 2001, Renaissance Park’s sculptural fountain symbolizes the strength and energy of the residents of the surrounding neighborhood as well as the African American community in general. Black granite spheres configured in a pyramidal pile represent significant African American figures who made important contributions to music, literature, sports, politics, and social change. The names of eleven significant individuals such as Martin Luther King, Rosa Parks, Harold Washington, and Maya Angelou are incised into the stone. Water flows from the stone, forming a river representing a spring of positive change. The river trickles towards a tall black granite plinth, symbolically allowing love and positive energy to flow through the entire community.

Gallery:
Renaissance Park: Sculptural Fountain
Date Posted: 7/28/2015 Each of these black granite spherical elements is inscribed with the name of noteworthy African…
Advertisement