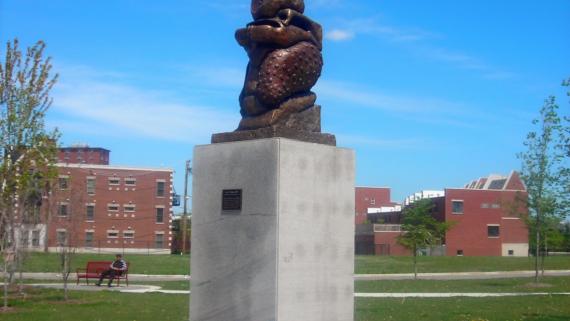 Restoration is an abstract bronze sculpture named in honor of the recent transformation of its surrounding Oakland community in Chicago. Its sculptor, Milton Mizenburg Jr. is an activist who played a significant role in the renewal of his neighborhood. A former forklift operator, Mizenburg began creating metal jewelry in the early 1970s. A few years later, he started to experiment with carving wooden sculptures. Although he was construction worker at that time, the self-taught artist soon sold his earliest sculptures.

In 1988, Mizenburg moved into Oakland and rehabbed a run-down three-story building as a home for his family as well as an art studio. From the beginning, he was committed to improving the surrounding neighborhood. Sweeping the sidewalks became a daily ritual and he quickly decided to install his work outdoors for the whole community to enjoy.

Despite Mizenburg’s best efforts, the neighborhood was deeply affected by deteriorated public housing units known as the Lake Park Homes. In the late 1990s, the Chicago Housing Authority began a Plan for Transformation which included razing the Lake Park Homes. The site was redeveloped into a mixed income community known as Lake Park Crescent which includes a 2.8-acre park with a playground and passive areas. The gateway to the park features Milton Mizenburg Jr.’s first bronze sculpture which he fittingly named Restoration.

Gallery:
Williams - Davis Park: Restoration
Date Posted: 7/31/2015 The small plaque on the base dedicates the sculpture to R20the men and women who remained in the…
Advertisement