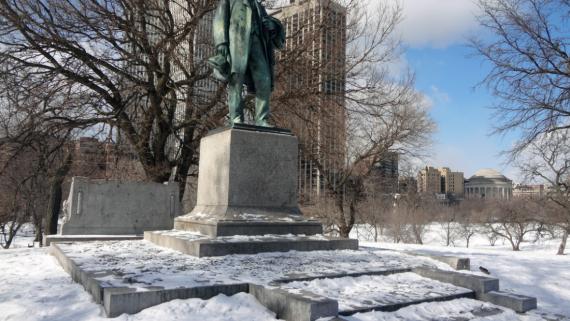 This sculpture honors Civil War hero and fourteenth Governor of Illinois, Richard J. Oglesby (1824–1889). Born in Kentucky, Oglesby moved to Decatur, Illinois, where he was raised by his uncle. After studying law and a brief stint as a gold miner in the West, he joined the Republican Party and was elected to the State Senate in 1860. Serving in the Union Army during the Civil War, he helped organize and fought with the 8th Illinois Infantry Regiment. At the end of the war, President Abraham Lincoln made Oglesby a Major General. Elected as Governor of Illinois for three terms (although he did not serve the entire second term), he was also a United States senator from 1873 to 1878.

Thirty years after his death, five prominent Chicagoans joined together to commission a monument to Oglesby. These individuals—John Barton Payne, J.S. Runnels, John W. Bunn, L.C. LaForce, and Martin B. Bailey—hired Leonard Crunelle to create the sculpture. A French immigrant who worked as an Illinois coal miner prior to becoming an artist, Leonard Crunelle (1872–1945) was mentored by Chicago’s preeminent sculptor, Lorado Taft. Over the years, Crunelle produced several important outdoor artworks for Chicago, including Grant Park’s Fountain Figures and The Victory Monument—a memorial on Martin Luther King Drive dedicated to a regiment of African-American soldiers who fought in World War I.

Crunelle portrayed Governor Oglesby in a humanistic manner—the ten-foot-tall bronze figure is depicted holding his hat in one hand and his coat folded over his other arm. The 1919 sculpture is located on top of Mount Prospect, a manmade hill just east of Lincoln Park’s North Pond.

The Chicago Park District conserved the monument in 1993. This included treating the bronze figurative sculpture and cleaning its granite base.