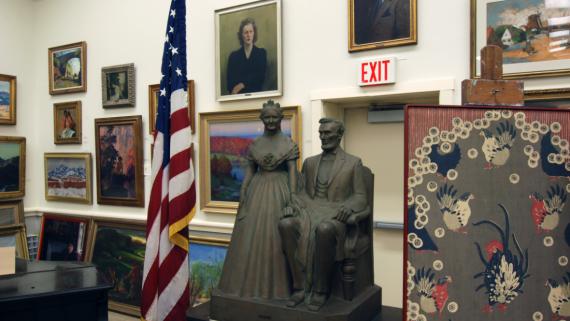 Located in the Ridge Park field house, the John H. Vanderpoel Memorial Art Gallery displays an impressive collection of nineteenth and twentieth century fine art. The gallery honors John Henry Vanderpoel (1857–1911), a revered Chicago artist and teacher. Vanderpoel, who emigrated from Holland with his family during his adolescence, studied at the Chicago Academy of Design, a forerunner of the School of the Art Institute. Afterwards, he trained at the Académie Julian in Paris.

Vanderpoel exhibited work at the 1893 World’s Columbian Exposition and received a bronze medal for a painting at the 1904 Louisiana Purchase Exposition in St. Louis. He taught at Chicago’s School of the Art Institute from 1880 to 1910, and then briefly headed the painting and drawing division of the People’s University Art Academy in St. Louis prior to his sudden death.

In 1913, two years after Vanderpoel died, his sister, Marie Leenheer became concerned about the possible fate of his painting entitled “The Buttermakers,” owned by a private club that was closing down. She mentioned the situation to friends and neighbors in the Beverly community, where the artist had lived for over a decade. Many contributed money to this cause. After successfully acquiring “The Buttermakers,” the group presented the painting to nearby Chicago Public School that had recently been named in his honor.

During the painting’s unveiling in 1914, artist and teacher Dudley Crafts Watson made an impassioned speech suggesting that this donation could mark beginning of a whole collection art to memorialize Vanderpoel. According to the Chicago Tribune, he said: “Don’t let this be this the end of this beautiful tribute. Scores of American painters loved and honored your neighbor. Ask each of them to contribute one of their works— more if they will— to a great memorial to Vanderpoel.” Offers of artworks came in quickly, and the following year, John A. Campbell, one of the late artist’s closest friends, formed the John H. Vanderpoel Art Association. Campbell went on to serve as long-time volunteer curator of the collection.

The John H. Vanderpoel Art Association was so successful, that by the late 1920s, the collection had outgrown its space in the elementary school. In 1929, as the Beverly firm of Hetherington Architects designed a new and larger field house for Ridge Park, the park board directed them to include a 3000 square foot room for the art collection. The gallery soon opened in the south wing of the new field house. It continued to operate through a lease agreement when the Ridge Park District consolidated into the Chicago Park District in 1934.

The association accepted many additional artworks over the years. In 1969, when the Beverly Art Center opened on the campus of Morgan Park Academy, 182 works from the John H. Vanderpoel collection were moved to the new arts facility. The collection was displayed in the two locations for 35 years. The Beverly Art Center also had a space shortage; however, and in 2004, the organizations returned its part of the Vanderpool collection to the Ridge Park field house.

Today, the collection includes approximately 600 works by 400 artists. Only a portion are on public view because of the vast size of the collection. Despite this, the gallery is filled with hundreds of world-class drawings, etchings, paintings, and sculptures. In addition to several works by Vanderpoel, highlights of include works by Grant Wood, Mary Cassatt, Maxfield Parrish, Daniel Chester French, and Lorado Taft.