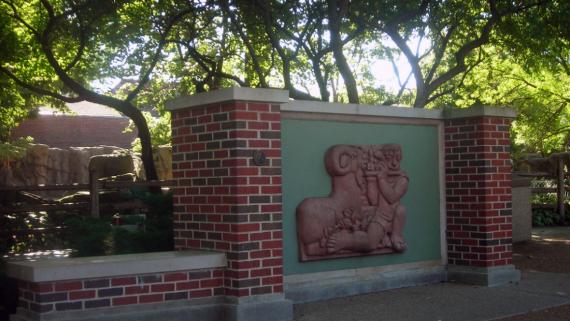 In the early 1950s, Chicago architects Shaw, Metz and Dolio commissioned acclaimed sculptor Milton Horn to create two identical terra cotta bas-relief panels for their design of the Seneca-Walton Apartment Building. Completed in 1952, the building had the enormous panels mounted at its portico entrance. Entitled Rites of Spring, the sculptural panels portray Pan, the Greek god of shepherds, flocks, mountains, and rustic music, playing a flute for a large ram.

In late 1960s, when the building was demolished the artworks disappeared. Thirty years later, they were discovered in the causeway of a residential building on Irving Park Road in Chicago. The Milton Horn Art Trust acquired the panels, and donated this one to the Lincoln Park Zoo. It was conserved, incorporated into a new brick and limestone setting, and dedicated in 2004. The Trust is currently conserving the identical panel which will become a gift to the Jewish Federation of Metropolitan Chicago in the near future.

Milton Horn (1906–1995) was one of Chicago’s most significant sculptors. He immigrated to the United States from Russia with his parents as a child, and became an American citizen in 1917. As a teenager, Horn began training with Boston sculptor Henry Hudson Kitson. In 1925, he received a Tiffany Foundation Fellowship which allowed him to study Japanese and Chinese art. He received his earliest sculpture commissions in the late 1920s, and was employed as a Works Progress Administration artist during the Great Depression.

Horn moved to Chicago with his wife Estelle in 1949, where he continued to have a successful and prolific career. While his work can be found in various places throughout the United States, Chicago possesses the largest collection. This includes another bas relief entitled Chicago Rising from the Lake—discovered in a dump by a Chicago firefighter in 1997 and recently installed at the Columbus Drive Bridge’s lower façade along the Riverwalk. Horn also sculpted the Merchandise Mart Hall of Fame busts. A scaled-down version of his Aaron Montgomery Ward Bust is located in Grant Park.