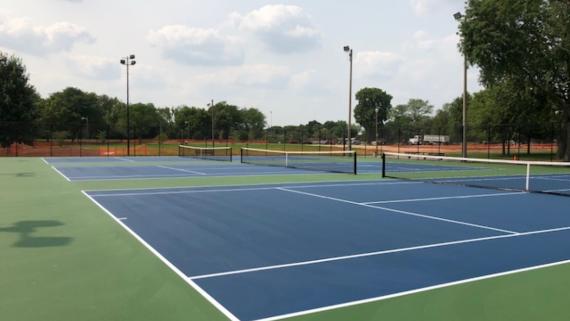 Boat House on the west side of River Park.

Located at the convergence of the Chicago River and canal, River Park is 28.81 acres and it offers rich wildlife habitat, excellent fishing, and a canoe launch. River Park boasts a swimming pool and an interactive water playground in the summer months.

The artificial turf soccer field and running track, as well as a soft-surface playground, draw visitors from around the city. The park also features seven tennis courts and two baseball fields.

Numerous children head to River Park for its strong Park Kids after-school program. Several programs are held in the park’s large auditorium, which is also available for rental by private groups. Basketball and indoor soccer are two popular programs for both youth and teens. Teens get together for a leadership camp in the summer, and preschoolers gather for playgroups. Adult programming at River Park includes men's basketball.

River Park Boathouse, located west of the river is home to the Chicago RIverLab, and the Chicago Park District's family paddling programs. An accessible boat launch for the human-powered craft is available for public use at no charge. When launching from River Park, please park on the street and carry your paddle craft to the launch. Vehicles may not use the bike path for loading or unloading. See events below.

At 30 acres, River Park is the largest of the six parks established by the River Park District, one of 22 independent park commissions consolidated into the Chicago Park District in 1934. Northwest side residents created the River Park District in 1917 to provide recreational opportunities and increase property values in the territory along the Chicago River's North Branch and the North Shore Channel. Almost immediately after its creation, the River Park District began to purchase land north of Argyle Avenue, where the river and the channel separate. Although land acquisition was not completed until 1922, the site opened to the public on July 4, 1920, when the park district dedicated a new flag pole there to neighborhood children. Formal improvements began two years later, with the remodeling of an existing building for fieldhouse use. In 1926, landscape architect and River Park District board member Jacob L. Crane, Jr. developed a plan for River Park. Crane's plan covered nearly 40 acres of land, including approximately ten acres northwest of the fork. (This ten-acre plot was never actually developed as parkland, and now belongs to North Park College.) In 1927, the Chicago Landscape Company implemented a modified version of Crane's plan that included beautiful greenspaces, a foot bridge over the North Branch dam and waterfall, children's playgrounds, athletic fields, and pathways for walking, bicycling, and horseback riding. Chicago architect Clarence Hatzfeld designed an impressive brick fieldhouse with a three-story central section and a long wing on either end. Constructed in 1929 to replace the original structure, the fieldhouse included a 300-seat assembly hall and a fully-equipped kitchen. The Chicago Park District installed a new swimming pool in 1948, and a new bath house in 1970. During the fall of 1999, the City of Chicago began constructing a boat launch and river walk along the south side of the North Branch, which the park district will operate once completed.

Out of an abundance of caution Park Advisory Council Meetings will be held virtually for the near future. Please contact the River PAC for a schedule of meetings.

Gallery:
River Park: Pottawattomie Village
Date Posted: 7/27/2015 Painted by a group of students at Pottawattomie Park in 1941, this mural portrays the vibrant…