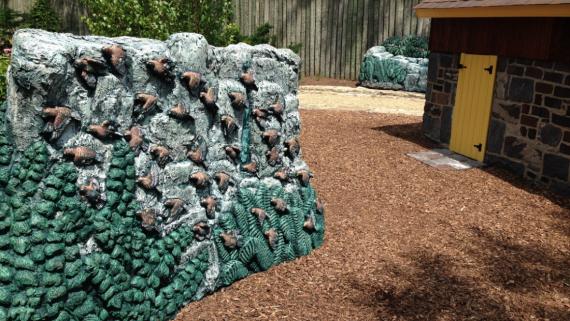 Phil Schuster produced a series of four artworks for Suite Home Chicago: An International Exhibition of Street Furniture in 2001. The Department of Cultural Affairs organized the exhibit following the success of its 1999 Cows on Parade exhibit. More than 100 artists enlivened the fiberglass suites of couches, televisions, and chairs with ottomans. In reviewing the exhibit, Chicago Tribune art critic Alan G. Artner identified Schuster's entry, known as River Suite, as one of the five most successful sculptural sets in the exhibit.

Schuster adorned his grouping of four furniture pieces with richly sculpted foliage and river scenery. A stream flows along the bench and over the seat in a gently waterfall. It is surrounded by boulders and lush green plants. The television includes a highly textured sky with a large flock of birds and plants along the lower edges. The donor who purchased the original ensamble of four pieces never took possession of these two elements due to their exessive weight. They have now been incorporated into Indian Boundary Park's innovative Nature Play Center.

Gallery:
Indian Boundary Park: River Suite
Date Posted: 7/24/2015 The plaque on the base of the keystone acknowledges that its donor, Julius H. Huber, dedicated it…
Advertisement