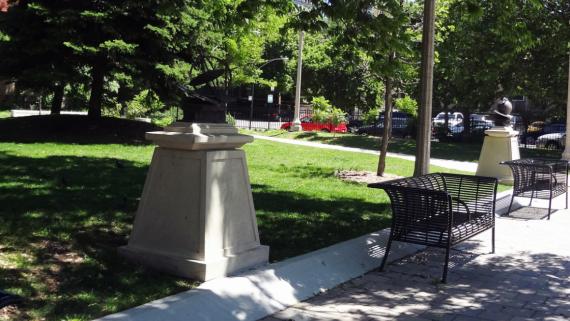 In 1994, the Chicago’s Department of Transportation completed the construction of an ambitious 1500-foot long new Roosevelt Road Bridge. The fanciful bridge is designed to look historic. It is embellished with obelisk-like light fixtures and classical posts topped with bronze sculptures. Created by Hungarian-American sculptor Miklos Simon (b. 1960) there are three versions of the bronze artworks. Each of the versions includes a stack of books topped with a globe and relates to one of the three museums located at the south end of Grant Park near the eastern terminus of the bridge. The sculptural group symbolizing the Field Museum of Natural History has dinosaurs and a wooly mammoth topping the globe. Another one of the artworks has a group of dolphins swimming on top of the planet Earth globe, representing the Shedd Aquarium. The third sculpture has a compass as its globe, in honor of the Adler Planetarium.

The Department of Transportation removed sections of the bridge’s decorative wall in 2012 during a major rehabilitation project for Roosevelt Road. In order to salvage and reuse the well-crafted sculptural elements, the Department of Transportation transferred the artworks to the Chicago Park District, and they were soon integrated into the redesign of Buttercup Park’s landscape.