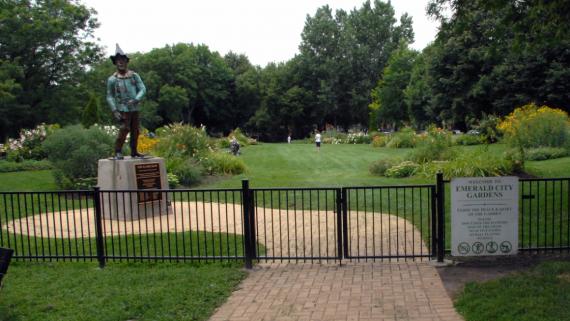 This seven-foot tall cast bronze Scarecrow was the third of four sculptures commissioned by the Oz Park Advisory Council to depict characters from L. Frank Baum’s The Wonderful Wizard of Oz. The Oz Park Advisory Council raised $40,000 for the project and has also committed to assist the Chicago Park District with the maintenance of all the sculptures in the park. All four of the sculptures were created by sculptor John Kearny (b. 1924).

At his own foundry in Cape Cod, Massachusetts, Kearney cast the Scarecrow sculpture in twenty-two pieces. After shipping the pieces to Chicago, he assembled them here over a period of several months. Kearney then added details to the sculpture, including straw detailing on the gloves and texture to the rope. Kearney’s last steps were to patinate the sculpture, paint the surface in various colors, and apply the final coating. In 2005, the Scarecrow was installed in Oz Park’s Emerald City Garden.