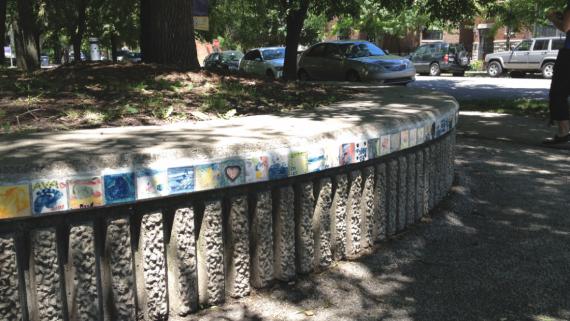 Located on the knee walls and benches of Senior Citizens’ Memorial Park and adjacent Holstein Park, these colorful tile mosaics were made possible through the support of the Bucktown Arts Fest. A non-profit, all volunteer run, neighborhood celebration that has taken place annually since 1986, the fest showcases approximately two hundred local artists, as well as musicians, dancers, and poets each summer. All of the proceeds from artists’ sales go directly to arts and educational programming in the Bucktown/Wicker Park neighborhood, particularly at Holstein and Senior Citizens’ Memorial Parks, which have long played host to the fair.

Each year, the Bucktown Arts Fest features a popular Kids’ Tent, which provides free activities and art crafts for children. From 1999 to 2009 the tent included a station where children could paint their own ceramic tiles, which were later installed in either Senior Citizens’ Memorial Park. or Holstein Park. These playful tiles not only decorate the knee walls of both parks but also appear on the sides of the aggregate concrete circles that surround the built-in game tables at Senior Citizens’ Memorial Park.

The images on the tiles vary widely and reflect the unique imaginations of the children who painted them. Some children chose to portray abstract, geometric designs of bright swirling colors; others depicted figural scenes that capture the everyday details of the park, including birds, butterflies, flowers, and trees. Sports logos of the Cubs and Sox appear on several tiles, reflecting the hometown rivalry of Chicago’s two baseball teams. At the bottom edge of most tiles, festival volunteers wrote the name of the child and the year that the design was painted. This record provides park patrons with a sense of the span of the project. It also creates a fun, engaging activity for the children, who can return to the park and search for their tile.