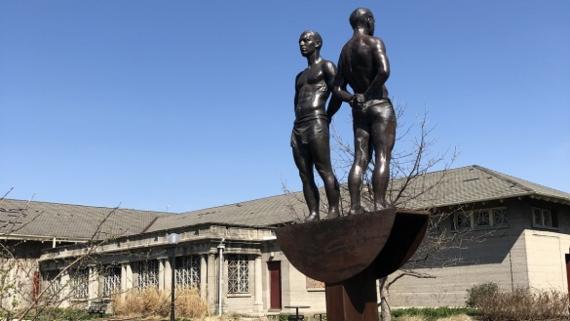 Behind Cultural Center near pond

Artist's Statement: Raised and educated in Italy, Dora Natella studied sculpture in the classical tradition at the Academy of Fine Arts in Naples. Later, she moved to the United States for advanced studies in bronze casting techniques and for the opportunity to immerse herself in a new culture with fewer direct connections to a classical past. She went on to earn an MFA in sculpture at Western Michigan University and has continued a practice that includes both teaching at the college level as well as her own work in the studio. Presently, she serves on the faculty of Indiana University, South Bend. In her work, she maintains an allegiance to a legacy of the figurative tradition from the Renaissance but with openness to contemporary modes of expression.

The title, “Sentinel,” was inspired by the sitter’s pose.  It is a memorial to a young man, a student of hers, who regrettably passed away. The male figures appear confident and strong, gazing out at the horizon, arms crossed behind their backs, as if guarding something precious. The height of the steel pedestal enhances their presence in the surrounding space.