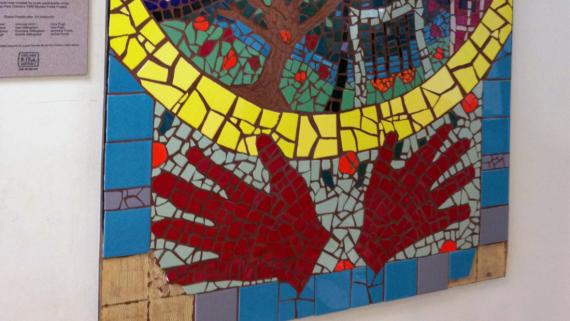 Beginning in the late 1990s, the Cabrini Green area of Chicago’s Near North Side underwent a period of intense transformation. The gentrification included demolishing the Cabrini Green housing projects to make room for new stores, homes, and public facilities. As part of the redevelopment, Seward Park received a $3.2 million renovation that included updates to the landscape and playground, as well as to the historic field house, which was designed by Perkins, Fellows, and Hamilton.

The newly revamped park opened in 1999. That summer, Seward Park also received a partial grant from the Illinois Arts Council to add art in the park. This vibrant mosaic was created through the additional support of the Chicago Park District’s Mosaic Parks Project. The program enlisted the help of art instructor Shana Pearlmutter, who oversaw Seward Park’s weekly arts programming for children. Pearlmutter worked with twelve local children to design and produce the mosaic, which addresses the changes that took place in the neighborhood.

The upper portion of the mosaic portrays several images of gentrification. The set of swings and green lawn represent the park’s renovations. On the right, a tall brick building conveys the influx of new construction that occurred in the area. Music notes and an open score illustrate the cultural programs that accompanied the reinvigorated neighborhood. These motifs are contained within a larger sphere supported by two red hands. The hands symbolize a unified community coming together to improve the neighborhood—a process that resulted in a safer, more family friendly environment for its residents.