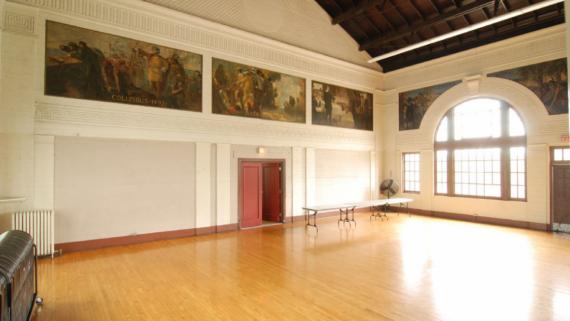 In the early 1910s, Thomas Wood Stevens and John Warner Norton, instructors of mural painting at the School of the Art Institute of Chicago, believed their students needed opportunities to carry out large works in public settings. As a result, senior level classes soon began painting numerous murals for Chicago Public School buildings and field houses within the city’s South Park System. Many of the park murals were underwritten by an art fund established by Judge John Barton Payne, who was appointed to the South Park Commission’s board in 1909 and served as its president from 1911 through 1923. In January 1912, Judge Payne made arrangements with the Art Institute to have students paint a series of murals in Sherman Park’s assembly hall. The neoclassical building had been designed by D. H. Burnham and Company and constructed five years earlier.

This mural series extends around the entire upper perimeter of the large, rectangular assembly hall. The east and west walls each display three panels, while the north and south sides have arched windows framed by spandrel murals. Eight students produced the murals during the spring and summer of 1912. A pamphlet published soon after the project’s completion describes the subjects as scenes of “American history, with a marked emphasis on the constructive phases in the history of the Middle West.” This document also explains that because of their rectangular shape, the panels convey “a more realistic treatment,” and provide “a chronological sequence of significant moments treated somewhat dramatically.” The spandrels, “where the contour to be filled is more architecturally limited, have been designed in a more decorative manner, without the introduction of historical characteristics.”

The series begins with Nouart Seron’s Columbus (1492), Paul Sargent’s Jamestown (1607), and George Steinberg’s Plymouth (1620). The opposite, west end of the room features Beatrice Braidwood’s Joliet and Marquette (1673), Gerrit Sinclair’s LaSalle and Tonty (1682), and George Steinberg’s George Rogers Clark (1778). The south wall has six spandrel murals by Lucille Patterson, including Puritan Settlement and Winter in Valley Forge. The final six spandrel murals on the north wall focus on the settlement of the Midwest. Two center paintings by Roy Tyrrell flank a blind archway, and four murals by Anita Parkhurst frame the outer arched windows.

Most of the eight students who painted the Sherman Park murals went on to become successful artists. Born in Pennsylvania, Beatrice Braidwood (1868– 1957) was a commercial artist in Chicago who served as art editor for Social Progress magazine in 1922. The three other female students also became graphic designers. Nouart Seron (1893–?), daughter of Armenian immigrants, won several awards as an Art Institute student and later served as a staff illustrator for World Book Encyclopedia in the late 1910s. Anita Parkhurst Willcox (1892–1984) produced a vast collection of illustrations for magazines and other publications, including covers for Saturday Evening Post, Colliers, Every Week, and McCalls. She gained substantial notoriety for several illustrations, such as a 1916 “New American Woman” image. Lucille Patterson Marsh (1890–1978) was born in North Dakota and became an acclaimed New York magazine and book illustrator. Her work often features quaint portrayals of children in household product advertisements.

Gerrit Sinclair (1890–1955) was born in Michigan, attended the School of the Art Institute, and later served in Italy during World War I. After the war, Sinclair settled in Milwaukee, Wisconsin, and achieved great success as a teacher at the Layton School of Art and as a painter who was part of the American Regionalism movement. His paintings were exhibited throughout the nation and at Paris Salons and he also created other murals, including one in the Wausau Wisconsin Federal Building. George F. Steinberg (1887–?), also born in Michigan, remained in Chicago after his studies though very few records of his work remain.

Born and raised in Hutton County, Illinois, Paul Turner Sargent (1880–1946) attended Eastern Illinois State Normal School (now Eastern Illinois University) before studying at the School of the Art Institute. A prolific landscape painter, he taught at Eastern for several years. Lastly, Roy Tyrrell (1886–?) was the son of the Australian immigrant ceramicist Edward Tyrrell. Roy Tyrrell was a Vaudevillian singer prior to attending the School of the Art Institute. Although he created another mural for Bessemer Park (no longer extant) three years after working on the Sherman Park murals, it is uncertain as to whether he continued working as an artist in later years.

Gallery:
Sherman Park: American History Series
Date Posted: 7/27/2015 Over the course of several months in 1912, eight students at the School of the Art Institute of…
Advertisement