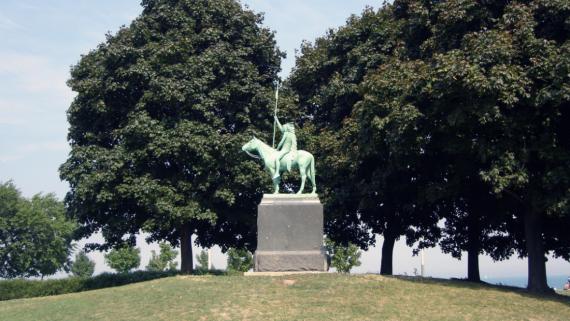 Sculptor Cyrus Edwin Dallin (1861–1944) had great reverence for Native Americans. Born in Utah, he grew up playing with Ute Indian boys who lived in nearby encampments. In 1880, Dallin went to Boston to train under Truman H. Bartlett, an accomplished sculptor. Several years later, he moved to Paris to study at the Académie Julian. In Paris, Native Americans became the focus of Dallin’s artwork. When Buffalo Bill’s Wild West Show came to France to perform, Dallin had several Indians pose for him as models. In 1889, he began working on a sculpture depicting an Indian chief on horseback holding a staff with a feather on it, symbolizing peaceful intentions. Dallin named the artwork A Signal of Peace and displayed it at the Salon of 1890 in Paris.

In 1893, Dallin’s sculpture was exhibited in Chicago at the World’s Columbian Exposition. The following year, Judge Lambert Tree (1832–1910) purchased the monument for placement in Lincoln Park. Judge Tree, who also donated the Robert Cavelier de La Salle Monument, wrote that Indians had been “oppressed and robbed by government agents, deprived of their lands… shot down by soldiery in wars fomented for the purpose of plundering and destroying their race, and finally drowned by the ever westward tide of population.” Sharing this sentiment, Cyrus Dallin created many other sculptures portraying Native Americans in a respectful manner, including his 1909 Appeal to the Great Spirit which was cast three times and located in Muncie, Indiana; Tulsa, Oklahoma; and Boston, Massachusetts.

A Signal of Peace, originally located just northwest of the Ulysses S. Grant Monument, was moved to its current site east of Lake Shore Drive by the mid 1920s to accommodate the expansion of the Lincoln Park Zoo. In the early 1940s, the Billy Caldwell Post of the American Legion petitioned to move the bronze sculpture to the Caldwell Woods in the Cook County Forest Preserves. The Chicago Park District denied the request.

A Signal of Peace | Artwork

A Signal of Peace | Artwork