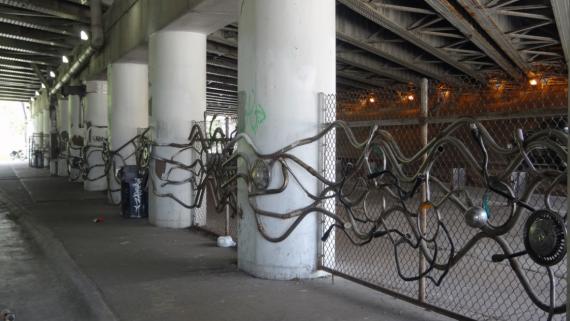 When the idea of building a skate park under the Kennedy Expressway was first suggested in 2004, community members responded with strong enthusiasm. As a result, the Chicago Park District entered into a lease agreement with the Illinois Department of Transportation to use a 1.6-acre surface area under and adjacent to the expressway for the skate park. The City of Chicago transferred Open Space Impact Fees to the Chicago Park District for this project. The Logan Boulevard Skate Park spans between the columns that support the Kennedy Expressway.

During the planning phase, community members suggested the inclusion of an original artwork in the park that would serve as a gateway into the community. The Park District commissioned installation artist and sculptor Lucy Slivinski to produce Silversurf Gate. The sculptural components enliven the space and create a sense of encloser at both the north and south ends of the site. A Chicago artist who received an MFA from the Cranbrook Academy of Art, Slivinski uses found objects and recycled materials to create her sculptures. Silversurf Gate is made of various chrome elements such as tail pipes and hubcaps along with colorful lenses from old traffic signals.