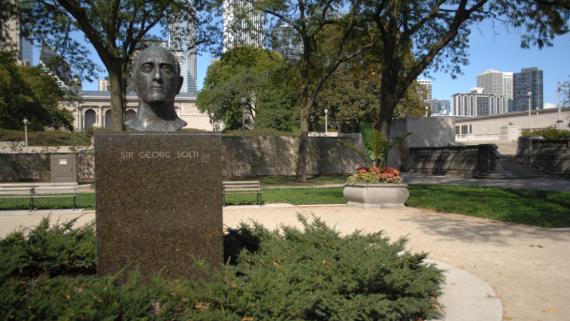 Sir Georg Solti (1912–1997) was a world-renowned orchestra conductor and thirty-two-time Grammy Award winner who brought new life to the Chicago Symphony Orchestra in the 1960s. Born and trained in Budapest, Solti conducted orchestras in major cities throughout Europe and served as the music director of the Los Angeles Philharmonic before becoming the first Music Director Laureate of the Chicago Symphony Orchestra from 1969 to 1991. During that period, he conducted a total of 999 performances. He intended to conduct his one thousandth performance in honor of his eighty-fifth birthday, but he died a few weeks beforehand.

Recognizing his importance to Chicago, Solti once said, “They should erect a statue to me.” A group of private donors made Solti’s wish come true. The group raised approximately $30,000 to commission Dame Elisabeth Frink (1930–1993), a British artist known for her bronze figurative sculptures, to produce the bust of the legendary conductor. After being briefly displayed at London’s Royal Opera House, the bronze bust was installed in front of the Lincoln Park Conservatory on the maestro’s seventy-fifth birthday in 1987.

In 2006, the Sir Georg Solti Bust was relocated to the newly-designed Solti Garden in Grant Park, and placed on a new dark granite base. Chicago’s first lady Maggie Daley and Lady Valerie Solti, Sir George’s widow, were present at the rededication ceremony. The Grant Park Conservancy co-sponsored the new garden and relocation of the monument. In its new site, Solti's portrait bust distantly faces the Spirit of Music, which honors another legendary Chicago Symphony Orchestra conductor, Theodore Thomas.