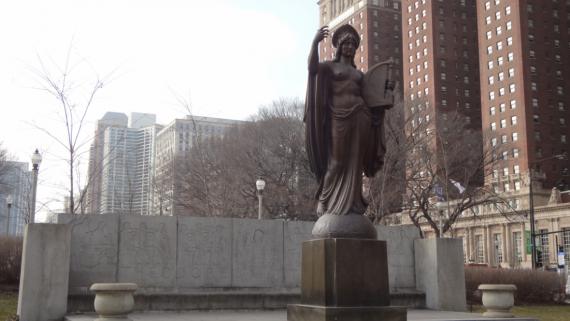 The Spirit of Music honors Theodore Thomas (1835–1905), first conductor of the Chicago Symphony Orchestra (CSO). Born in Germany, Thomas was a well-respected violinist and conductor who settled in Chicago in 1889 to help establish the city’s first permanent orchestra. After performing in the Auditorium Theatre for many years, Thomas achieved his dream of building a permanent home for the CSO. The Burnham-designed Orchestra Hall was dedicated in December 1904, only a few weeks before Thomas died. Fourteen years later, the B.F. Ferguson Fund commissioned Czech immigrant Albin Polasek (1879–1965), a talented artist who headed the sculpture department at the School of the Art Institute, to create the monument.

The fourteen-foot-tall bronze muse is depicted holding a lyre. According to Polasek, the face behind the mask on the lyre is modeled after his own. American architect Howard Van Doren Shaw (1869–1926) collaborated with Polasek on the monument’s granite exedra and bench. Stretching across the low forty-foot-long wall behind the bronze figure, the exedra portrays members of the orchestra playing their instruments in sculptural relief.

Over the years, the sculpture has stood in several different locations in Grant Park. Originally erected just south of the Art Institute, facing Orchestra Hall in 1923, it was first relocated in 1941 when museum’s south garden underwent major renovations. At that time, the Park District separated the bronze figure from its exedra and symmetrically placing the sculpture in front of a classically-designed peristyle near Randolph Street. In 1958, the bronze sculpture was moved again—still without its original backdrop—near the Buckingham Fountain.

In the early 1990s, a lakefront jogger discovered pieces of the artwork’s original carved granite exedra along the edge of Lake Michigan. The Chicago Park District soon retrieved them, and restored the original exedra as well as the bronze figurative sculpture. The restored artwork was installed in a new location at Balbo Drive and Michigan Avenue. The Park District went on to create the adjacent Spirit of Music Garden, now the popular venue for Chicago’s annual Summer Dance series.