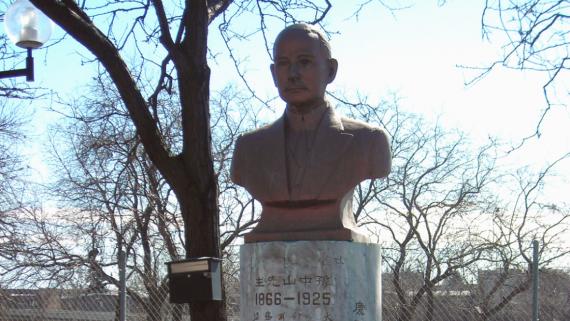 Chinatown had suffered from a lack of adequate open space for decades when the City of Chicago acquired a strip of land adjacent to the Stevenson Expressway in the 1970s to develop a new small park. The City’s Bureau of Architecture created a plan for the one-third-acre site that included a playground, shady sitting areas, and a small Sun Yat-Sen Memorial.

The memorial includes a rectangular pool in which a bronze portrait bust of Sun Yat-Sen sits atop a marble pedestal. Chinese sculptor Chueh Ming-teh produced the bust. Although little is known about Chueh Ming-teh, his work in America includes a full length sculpture of Dr. Sun Yat-Sen in Sacramento, CA and a Confucius monument in Cleveland Ohio.

Chicago's dignified bronze bust of Sun Yat- Sen stands on a pedestal inscribed with quotations by Confucius in both English and Chinese.  G.H. Wang, a long-time leader in Chinatown provided the English translation for the quotations. Installed in 1976, the inscriptions on the pedestal also honor the Bicentennial of the United States. In 2000, the Public Building Commission fully restored the monument’s rectangular pool as part of a citywide fountains initiative.

The first president of the Republic of China, Dr. Sun Yat-Sen (1866–1925) is considered the father of modern China. His political philosophy, known as Three Principles of the People, emphasized nationalism, democracy, and the people’s livelihood. Prior to his election as president in 1911, Sun Yat-Sen visited Chicago to raise money to help overthrow the Quing Dynasty. According to the New York Times, “Fifty young Chinamen imbued with the spirit of American democracy and graduates of the University of Chicago and the University of Illinois” planned to return to China to help Sun Yat-Sen in his efforts to establish the republic.” As one of the cities he visited on his trip to the United States to garner political support, it is fitting that Chicago’s Chinese American community erected the Sun Yat-Sen Memorial in his namesake park.